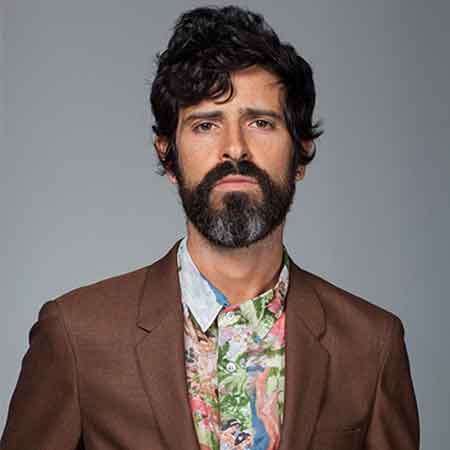 Devendra Banhart is one of the renowned singer-songwriters and visual artist who is widely perceived for his New Weird America genre including Freak Folk, psychedelic folk, folk rock, latin and lo-fi. His album, Mala earned number 2 Heatseeker in 2013. In addition, his drawings were featured in the San Francisco Museum of Modern Art.

The 36 years old handsome musician is currently living a single life. Previously, Devendra was in the relationship with then-girlfriends, Camille Rowe, Rebecca Schwartz, and Natalie Portman.

Devendra Obi Banhart was born on 30th May 1981, in Houston, Texas to Venezuelan mother, Maria Eugenia Risquez and an American father, Robert Gary Banhart. His parents divorced when he was only two years old and was raised by his mother.

Banhart later moved to Los Angeles with his mom after she remarried. Regarding his nationality, Banhart is Venezuelan-American and is of mixed descent.

Banhart studied at the San Francisco Art Institute on a scholarship. At that time, he started to busk instead of attending classes. In 2000, he dropped out of art school and began focusing on his music career.

Devendra Banhart grew up listening to the songs of Axl Rose, Kurt Cobain, Nusrat Fateh Ali Khan, and Ali Farka Toure. His first musical performance was in a church at a gay wedding where he performed Elvis Presley‘s Love Me Tender. Giving most of the time to passion, he then opened shows for Indie Rock bands called Sonic Youth.

Banhart released his debut album, The Charles C. Leary, in 2002. He then released Rejoicing in the Hands, Nino Rojo, Cripple Crow, Smokey Rolls Down Thunder Canyon, What Will We Be, Mala and so on consecutively.

Besides, he also collaborated with several talented artists including Gregory Rogove, Noah Georgeson, Josiah Steinbrick, H.Hawkline, Tim Presley and so on.

The handsome and diligent musician has been in the multiple relationships. Devendra first dated an Israeli actress, Natalie Portman in 2008. The couple dated for a brief time and separated. Banhart then dated American musician, Rebecca Schwartz, and French model, Camille Rowe. However, their relationship was also meant for only a short time.

Check out the pictures of Devendra with his ex-girlfriends;

Currently, Devendra Banhart has not involved in any love affairs. Besides, he seems to be concentrating on his music career.

Devendra Banhart has accumulated a good sum of money from his music career. Besides, he has also boosted his net worth through his visual art passion. Allocating information from several sources as of 2018, it is found out that Devendra current estimated net worth is around $3 million.