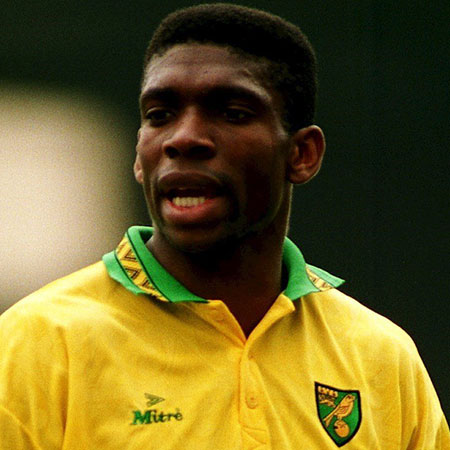 Whenever we talk about Efan Ekoku, we always remember him as a former football player. He had a successful career as a soccer player. He played the game at various levels till 2014 after he decided to take retirement from the game. After retirement, he, however, continues to be still associated with the game as a coach.

Born as Efangwu Goziem Ekoku on 8 June 1967 in Cheetham Hill, Manchester, England is a Nigerian former footballer who played as a striker. He began his club career by joining the Merton FC. He also has played for Sheffield Wednesday, Bournemouth, Wimbledon, Sutton United, Grasshopper, Norwich City and Dublin City respectively. In 1990, he got a chance to debut in his professional career by signing for Harry Redknapp’s Bournemouth. The team had just been relegated to the Third Division. The 1990-91 seasons were great for him as he managed just 20 games and three goals. He even did better in 1991-92 seasons. He managed to score 11 goals in 28 league games. In 14 games he scored seven goals in 1992-93 seasons. On March 26, 1993, he moved to Norwich City for £500,000. Since then the door to Premier League opened for him. Norwich was under the management of Mike Walker when Efan arrived at Carrow Road. Ekoku managed to score three goals in total ten games although the team Norwich was defeated by the Manchester United. Though his teammates and Ekoku achieved a third-place and was also qualified for the UEFA Cup.

On 15 September 1993, he scored Norwich’s first goal in European competition against Vitesse Arnhem in the UEFA Cup. He again scored four goals defeating Everton 5-1 at Goodison Park. He became the first player to score more than three goals in a Premier League game. In that he played a total of 27 league games scoring in 12 games. Until 14 October 1994 he remained at Carrow Road when a £900000 fee took him to Wimbledon replacing John Fashanu as a strike partner to Dean Holdsworth. Efan became the club’s top scorer in the league with nine goals which helped the club to rank ninth in the league and maintain their reputation as one of the hardest Premier League teams to beat. During 1995-96 seasons he scored seven goals. In the 1996-97 seasons, the club ranked eighth and was a semi-finalist in both of the domestic cups. With 11 league goals, he became the club’s top scorer.

On 27 August 1999, he moved to Grasshoppers Zurich for £500000. His first season in Switzerland was successful as he played 21 games scoring 16 goals. On 20 October 2000, he returned to England on a free transfer to Sheffield. He then arrived at Hillsborough. In 2004, he announced his retirement.

Moving on his personal details, he has a brother named Abi Ekoku. Abi is a former British discus champion and was also a professional rugby player played for London Crusaders. His another brother name is Nko.