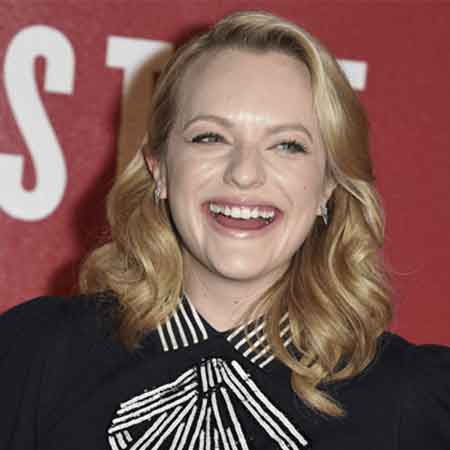 An American actress, Elisabeth Moss is best known for her roles on the TV series The West Wing, The Handmaid’s Tale and “Mad Men”. She is also known for her work in the film Girl Interrupted, Virgin and much more.

With a start of her career as a ballet dancer, now she plays the iconic role in Mad Men, The Handmaid’s Tale. So, today let’s know the detail information about Elisabeth’s early life, education, career, personal life, net worth, and salary. So just keep scrolling.

Elisabeth Moss was born in Los Angeles on 24th July 1982 to Ron and Linda Moss. Both of her mother and father were a musician. She also has a younger brother and Elisabeth was raised as a Scientologist.

Talking about her education, she began homeschooling and completed her graduation at the age of 16 in 1999. At the very young age, she dreamed to be a professional dancer. She even traveled to New York City at the School of American Ballet to study ballet.

Elisabeth made her first acting debut in 1990 in the NBC miniseries- Lucky/Chances. And from the year 1992 to 1995, she appeared in the seven episode of the TV series Picket Fences.

In the year 2004, she made the movie Virgin for which she was nominated for a 2004 Independent Spirit Award. From the year 2005-06, she got a supporting role in the horror series, Invasion. And finally, in 2008, she made her Broadway debut in the movie Mad Men.

After the production Mad men wrapped. She collaborated with Alex Ross Perry starring in the film Queen of Earth. In 2017, she played Hulu series The Handmaid’s Tale. And for her acting in the series she received a critically acclaimed and a Primetime Emmy Award for Outstanding Lead Actress in a Drama Series.

Well, Elisabeth prefers to keep quiet about her personal life. The more about her private relationship is under the radar but we do know that she was once married to SNL comedian, Fred Armisen. But in the year 2010, the couple separated citing irreconcilable differences.

It was also said that Scientology was the reason for her divorce as her religion. But Fred could not understand that her religion was as important as their marriage.

After her divorce, she dated Australian cinematographer Adam Arkapaw. She was even spotted getting cozy with a mystery man in the trendy beachside suburb of Bondi, Sydney.

The Golden Globe-winning actress, Elisabeth has accumulated a huge sum of money from her acting career as her net worth is estimated to be $8 million. Her salary earnings were estimated to be up to $75,000. As per the report of Celebrity Net Worth, she took $175 thousand per episode of The Handmaid’s Tale but was paid only $75,000 for Mad Men per episode.