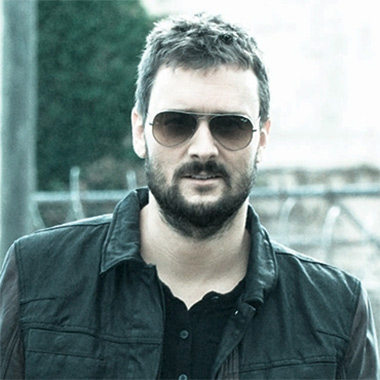 Eric Church is an American country singer and songwriter, who has been signed to Capitol Nashville since 2005. So far, he had released five studio album through the label. Some of his hit songs are, ‘Sinners Like Me’, ‘How ‘Bout You’, ‘Two Pink Lines’ and ‘Guys Like Me’.

Eric Church was born on May 3, 1977, in Granite Falls, North Carolina, United States. His birth name is Kenneth Eric Church. When he was 13 years old, he bought a guitar and started writing his own songs. He found a gig at a local bar when he was in his senior high school. He spent most of his time there. He mainly used to play Jimmy Buffett cover songs and also few of his own original songs. Some of these places were so rough that he got into a few arguments from the stage. For a few years, he used to play often in bars and restaurants throughout North Carolina. His college roommate, a fellow guitarist, and brother in the band “Mountain Boys”. He attended South Caldwell High School and graduated from there. Church also studied at Appalachian State University and graduated with a degree in business.

He was once engaged to a Spanish teacher. The future bride’s father attempted convinced him into a corporate career but he rejected the offer. He then broke the engagement.

Church co-wrote Terri Clark’s single “The World Needs a Drink”. He has also written Dean Miller’s 2005 album “Platinum” track “Whiskey Wings”. Capitol Nashville showed an interest in him but they were still not convinced enough to offer a recording contract. He then started working with producer Jay Joyce and because of which the record company’s attitude was changed. He wrote a ballad titled “Lightning” after watching the movie The Green Mile. The two successfully convinced Capitol Nashville. He released his first single “How ‘Bout You” from the debut album “Sinner Like Me”. His single reached at No. 14 on Hot Country Songs. For the first time, he performed on the Grand Ole opry in April 2006. His other single from the album, “Guys Like Me” and “Two Pink Lines” also reached the Top 20. His fourth single peaked at No. 51. Because of the album’s success, he went on a tour with Rascal Flatts and Brad Paisley.

He released his fifth single “His Kind of Money (My Kind of Love)” in 2008. In early 2008 his album debuted on the Billboard Hot Country Songs chart at No. 55. In early 2009 “Love Your Love the Most” was released in stores on March 24, 2009, with his second album “Carolina”. In October 2009, his single from the album “Hell on the Heart” was debuted and reached in top 10. His third single from the album is “Smoke a Little smoke”. He then moved to Capitol Nashville’s new imprint EMI Records Nashville in June 2010. Church released his fourth song EP entitled “Caldwell Country” on January 14, 2011.

In early 2011 he released “Homeboy” to country radio. On July 26, 2011, he released the album “Chief”. His album successfully reached at No. 1 on both the Billboard 200 and Top Country Albums. His single “Drink in My Hand” became his first No. 1 single in January 2012. He released his third single ‘Springsteen” from the album “Chief”. On July 16, 2012, he released his fourth single “Creepin” from the album to country radio. In January 2013 he released his fifth single “Like Jesus Does” from his album. In June 2013 his single “Like Jesus Does” peaked at NO. 6 on Country Airplay chart. In September 2012, he announced that he would release his first live album. He announced the album’s title as “Caught in the Act” on February 8. His album “Chief” was awarded Album of The Year. He was honored as the CMT Artists of the Year Awards in December.

Eric and Katherine are the founders of a non-profit organization called ‘The Chief Cares Fund’. The organization used to help underprivileged families in Tennessee, North Carolina, and Nepal receives clothing, proper bedding, and schooling. The foundation has also delivered Bibles to Haiti and helps fund Humane Society no-kill animal shelters. People can donate to the foundation on Eric Church’s website by simply donating or by purchasing exclusive Chief Cares Platinum Tickets to his concerts where money from the tickets goes to the Chief Cares Fund.

Church wears his signature aviator sunglasses as a result of wearing contact lenses. When his career was getting started, he was forced to deal with the heat from the stage lights drying out his contacts, which later became his trademark. As of 2016, Eric Church’s net worth is $10 million dollars.