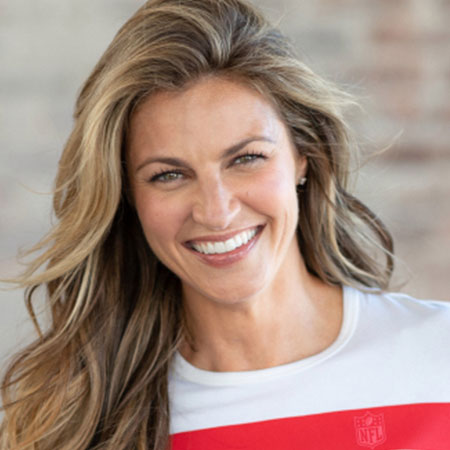 Erin Andrews is a gorgeous American journalist, sportscaster and television personality. She currently works as the host of Dancing with the Stars for ABC and FOX College Football for Fox Sports.

Erin was born on May 4, 1978, in Lewiston, Maine, U.S. Her full name is Erin Jill Andrews. She was born to Paula Andrews and Steven Andrews. Steven was a TV journalist and Paula was a teacher. When she was young she with her family moved to Tampa, Florida. Her father Steve is an Emmy Award winner for six times. She has a younger sister named Kendra Andrews who as a profession is an actress and dancer.

She studied at Bloomingdale High School in Valrico, Florida. While she was in her high school she was a member of the dance team and the National Honor Society. She also studied at Brandon School of dance Arts in Seffner, Florida. In 1996 she graduated from her high school. In 2000 she graduated from the University of Florida holding a Bachelor of Arts degree in Telecommunications. During her college days, she was the member of the Zeta tau Alpha sorority.

She moved to Los Angeles, California. For the last nine years, she lived in Atlanta, Georgia. In 2007 she dated David Wright, an American baseball player. She was rumored of being a relationship with Aaron Rodgers. She dated Chace Crawford in May 2012. She is currently dating Jarret Stoll. Jarret is a Canadian ice hockey player.

She as a freelance reporter worked for FOX Sports Florida in 2000. She also served for the Sunshine Network as a Tampa Bay Lightning in 2001 and 2002. She worked for the Turner South network as a reporter and a studio host. While she was working there she covered Atlanta Hawks, Atlanta Thrashers, and Atlanta Braves. In April 2004 she worked as a for ESPN’s ESPN National Hockey Night. She also covered little League World Series, College World Series, and Great Outdoor Games. In 2005 as a sideline reporter she covered Major League Baseball and ESPN College Football Thursday Primetime. She covered the Scripps National Spelling Bee for ESPN and ABC. She is also seen in many talk shows as a guest such as The Tonight Show with Jay Leno, The Oprah Winfrey Show and Jimmy Kimmel Live! She appeared on Dancing with the Stars tenth season with Maksim Chmerkovskiy in 2011. They came third out of 11 couples.

On January 13 2011 it was announced that to promote the ZigTrech brand she signed an endorsement deal with Reebok. Since 2010 she became a correspondent of Good Morning America. In June 2012 she left ESPN. She then joined Fox Sports. She contributed Fox NFL Sunday. She hosted Fox College Football Kickoff and Fox College Saturday. She replaced Brooke Burke-Charvet and co-hosted Dancing with the Stars 18th season.

Her zodiac sign is Taurus. She is built on average. Her weight is 55 kg. She belongs to a white ethnic background. Her hair is blonde in color. She has got beautiful gray eyes. Her sexuality is straight. She has sexy long legs.