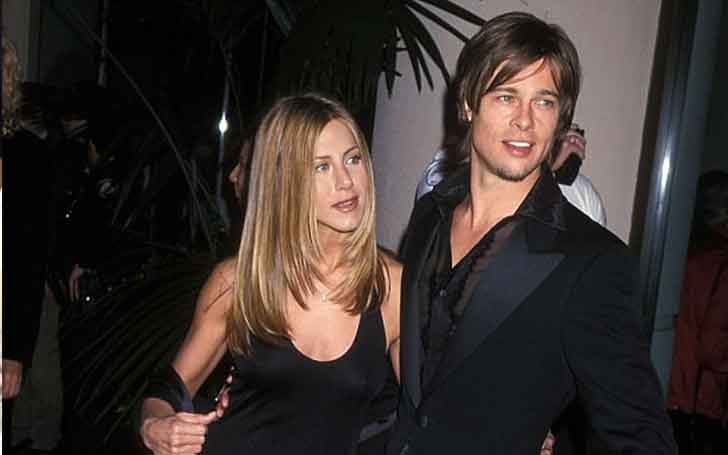 The rumor mills have churned again. This time it brings the news of Jennifer Aniston and ex-husband, Brad Pitt. Apparently, the ex-married couple is having a baby together according to the cover story of In Touch magazine. On the other hand, Pitt and ex-wife Angelina Jolie have been separated since 15th September 2016.

Jennifer and Brad who divorced back in October 2005 were together for seven years. So, is this news actually true or is it just a fad? Let’s find out. Today, we will explore Jen and Brad’s relationship, marriage, divorce dating, rumors, affair, spouse and more.

Rumor: Jennifer Aniston and Brad Pitt having a baby

The news comes after it was revealed that the Friends actress allegedly kept notes from Brad even during her marriage with Theroux. However, the rumor is completely false.

Firstly, the picture on the cover of In Touch magazine is photoshopped. It features an old photo of Julia Roberts and Brad which has been altered to replace Julia with Aniston.

[ CAPTION: Cover Story of In Touch Magazine ][ SOURCE: In Touch ]

Well, the article inside is just as fake. It claims that Aniston and Pitt have grown closer in the last couple of years. And they want to give their relationship another chance by moving in together.

The article also falsely states that the Fight Club actor has babies on his mind and all this could lead to them having a baby. The close insider goes as far as to say that they would even try IVF to get pregnant.

The whole news is quite far-fetched. Jennifer is just getting out of her previous marriage and it is not known if they are even in contact with each other. Instead, the whole situation feels more like wishful thinking from Aniston-Pitt fans. As of now, there is no weight on the news of them getting back together.

Jennifer and Brad had their first date back in 1989 which was set up by their agents. The couple then made their relationship public by attending the red carpet of Emmy Awards together on 12th September 1999.

The two officially became boyfriend and girlfriend. Within a few months, the couple got engaged which they announced by crashing the stage of a Sting concert.

On 29th July 2000, Aniston and Pitt tied the knot in a Malibu wedding. The event was lavish and gained a lot of attention from the media. They made a beautiful couple. The two attended various red carpet events together. After the end of sit-com Friends, Aniston stated in an interview that she wanted to start a family with Brad.

Everything seemed going well until Brad and Angelina met on the sets of Mr. and Mrs. Smith. The two fell in love on the set. This hampered Brad and Aniston relationship. They finally got divorced in 2005 citing irreconcilable differences.

However, throughout the years it has been clear that the divorce was due to Brad and Angelina’s budding relationship.

After the separation, Brad went on to marry Angelina Jolie in 2014 with whom he shares six children. As for Aniston, she exchanged vows with Justin Theroux on 5th August 2015. However, as mentioned above both the marriages have failed to work.

Jen and Brad are single at the same time after many years. So, their fans really want the two to get back together. Perhaps they will have to wait longer or forever for it to happen but at the moment, they are not together.