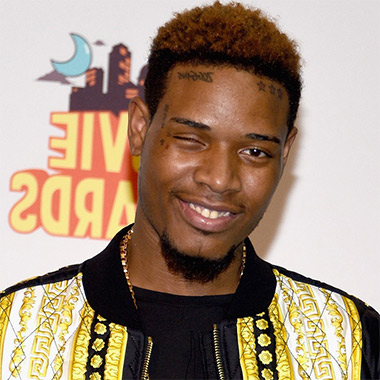 Fetty Wap is an American rapper. He is mainly known for his hit single Trap Queen. In May 2015, his single reached number 2 on the United States Billboard Hot 100. In November 2014 he signed with 300 Entertainment. He was also the part of XXL magazine 2015 Freshman Class and was also a member of the group Remy Boyz.

He was born on June 7, 1991, in Paterson, New Jersey, United States. His birth name is Willie Maxwell but he is famous with his stage name Fetty Wap. He was raised in a housing project. Since 2013 he started taking interest in music. He started as a rapper but he wanted to do something different so he decided to start singing as well.

He is mainly known for making money because of which he was nicknamed Fetty which means slang for money. His last name Wap was added for a tribute to his favorite rapper Gucci Mane. He developed glaucoma in both eyes when he was a child. He revealed that doctors were unable to save his left eye during an interview in 2015. He was fitted with an ocular prosthesis.

In 2014 he released his first single “Trap Queen”. Until mid-November 2014 he did not gain recognition. After that, the single became a platinum record. His single has over 81 million plays on SoundCloud. In February 2015 his debut mixtape Fetty Wap: The Mixtape was set for release but delayed because he wanted to add new songs. He released his second single “679” on June 29, 2015. In May of the same year, his song’s music video was premiered on YouTube. His single “My Way” reached on the top 10 list of the Billboard Hot 100. After Eminem, he became the first male rapper with three songs to reach the top 20 spots on the Billboard Hot 100. After Lil Wayne, he became the first male rapper to have concurrent singles which reach the top 10 chart. His fourth single “Again” reached at top 10.

On September 25, 2015, he revealed the cover art for his debut album. For his music, he uses trap drums frequently. He credits his mother for his vocal skills. According to him, he is inspired by Gucci Mane and Young Jeezy. His birth sign is Gemini. He belongs to Haitian descent. He has black hair and black eyes.

Fetty Wap has three children and as of 2016, he co-stars with Masika Kalysha, the mother of his youngest baby Khari, on VH1’s spin-off reality tv franchise ‘Love & Hip Hop: Hollywood’, which will dramatize their relationship as new parents after Fetty Wap originally refused to be the father.

In 2015 he won nominations of BET Awards as Best New Artist. In the same year, he was awarded MTV Video Music Awards for his single “Trap Queen” as Artist to Watch. He was nominated for same award for his single “My Way” as Song of the Summer.

He is active in using his social networking accounts. He uses his accounts to keep in touch with his fans. He has a large number of fan following because of his rapping skills. As of 2016, Fetty Wap has a net worth of $8 million dollars.