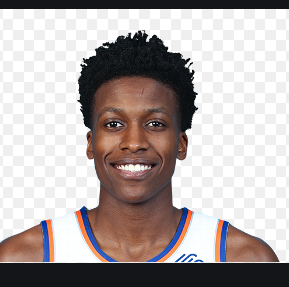 Frank Ntilikina is a French professional basketball player who is known as the New York Knicks of the National Basketball Association. He was named as one of the Best Young Player of the French League during his time with SIG Strasbourg of LNB Pro A.

Frank is focused on making his professional career rather than building a strong love life. He is still single and unmarried.

Frank Ntilikina was born on July 28, 1998, in Ixelles, Belgium to Rwandan parents. When he was just three years old, he moved to France and began his youth career from the age of five.

Frank first played for St-Joseph Strasbourg before making a move to Strasbourg IG’s youth academy when he was just 15 years old. Furthermore, he was invited to be involved in the Jordan Brand Classic International Game.

The talented basketball player signed a professional contract with the SIG Strasbourg in 2015. The contract was for four years. He then made his debut at the professional level in a French LNB Pro A 2014-2015 season against Boulogne-sur-Mer.

In 2016, Frank was named the FIBA Europe Under-18 Championship MVP in helping France to win the Gold.

Additionally, he signed a contract with Knicks. He was one of the second youngest active players in the NBA. Frank made his NBA debut in a blowout loss to Oklahoma City Thunder. In the same year, his fellow point guard Dennis Smith Jr. was selected one pick after him in the NBA draft.

The 19-years old player, Frank Ntilikina is a secretive person. He loves to keep his personal details away from media and public. He is focused on building his strong career rather than building a great love life.

Frank is living a lavish Life along with his parents in France. He is noted in the list as 242nd best-paid NBA player in the world. Previously his salary was estimated to be around $3,501,120.

But now he earns an astonishing amount of salary which is reported to be $4,155,720. Although the exact figure of Frank Ntilikina’s net worth has not been revealed, he is believed to earn more than millions of dollars.