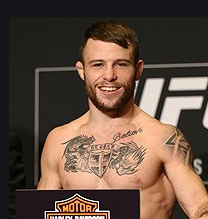 Jarred is possibly single and is not found dating anyone till date. Rather than building love life, he is focused on making a strong career.

Jarred Brooks was born on 2nd May 1993 in Warsaw, United States. He holds the American nationality and belongs to White American ethnicity. His zodiac sign is Taurus.

From his childhood days, he was interested in fighting. His father was also a great fan of wrestling which proved to be an aspiration for him to pursue his career as a mixed martial arts fighter.

The skilled fighter, Jarred began his career making a professional debut against Chris Catala at Xplode Fight Series: Lock Down. In the first game, he won the fight via submission.

In 2014, he held a record of 12-0 with a different technique of fighting at promotion including Michiana Fight League, WFC and Pancrase before signing the UFC.

Recently in 2017, he made his professional UFC debut against TUF 24 semi-final Eric Shelton at UFC 214. In the game, he defeated Shelton via split decision. Division Figueiredo later defeated him via split decision at the UFC Fight Night: Brunson vs. Machida.

The 24-years old fighter, Jarred is currently single. He is a secretive person and loves to keep his personal details behind the curtain. He is still unmarried and has not revealed any information related to his love life.

But he shares a photo with a lady on his Instagram account, who could be his possible girlfriend, but he has not revealed any information. Besides that, he also posted a few photos of Hindu’s Monkey God on different social media.

As Brooke is one of the fighters of UFC, he earned $12000 and a decent amount of bonus on his first match.  Further, in his second fight at UFC Fight Night 119, he collected $2500.

Although he didn’t play the UFC 208 Fight, he was given $12000. As of February 2018, he is believed to earn $55,000. However, he has not disclosed the exact figure of his net worth. As per the fights and endorsements, Jarred Brooks’s net worth is estimated to be around a million dollar.

The talented fighter is seen active on different social media including Twitter and Instagram. He owns three pet dogs and is seen posting several pictures on his Instagram.