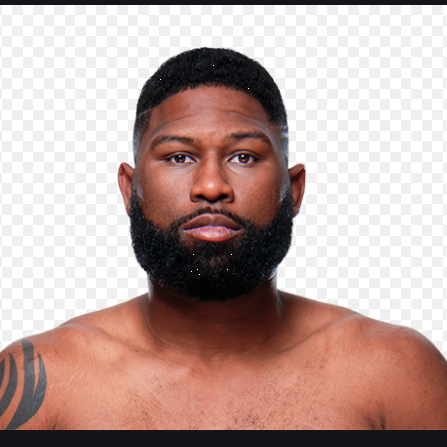 Curtis Blaydes is rising mixed martial artists who represent his country America in the heavyweight division of the Ultimate Fighting Championship. He is active in the related field since 2012 from the Elevation Fight Team.

Talking about Curtis Blaydes love life, he is in a love relationship with his long-term girlfriend and having a quality time with each other.

Curtis Blaydes was born on 18th February 1991 to his father Curtis Blaydes and mother Montee Anderson. He grew up in the city of Chicago, Illinois, the United States with four other siblings.

This jack man stands 6 feet 4 inch tall with the athlete body of 255.5 Ibs. His star sign is Aquarius. He holds the citizenship of the United States and belongs to African American ethnicity.

He went to De La Salle Institute for his education. Since childhood, he was active in sports and began participating in the wrestling. He has a record of winning a state title with the record of an undefeated 44-0 record.

[ CAPTION: Curtis Blaydes at the beginning of his career ][ SOURCE: Instagram ]

Besides fight, he plays football as a defense. He earned full wrestling scholarship in the Northern Illinois University but later dropped out.

Before Curtis Blaydes made his debut in the Mixed Martial Artist (MMA), he established himself as one of the rising stars in his college days as he transferred to Harper College from the University and he successfully won the NJCAA National Championship and left the school to focus his career in Mixed Martial Artist.

Then in the year 2014, he came out as a professional Mixed Martial Artist where he faced Lorenzo Hood in the XFO 51 event. Next, he faced William Baptiste, Brad Faylor, Allen Crowder, and Luis Cortez. He won all of the matches and signed for the UFC in 2016.

For the first time, Blaydes lost the match against Cameroonian-French professional mixed martial artist, Francis Ngannou, at UFC Fight Night 86, on 10th April 2016. It was really a top fight for Blaydes which went in the second round and lost the match at the conclusion of a doctor stoppage.

After the biggest loss of his career, Curtis Blaydes made himself as one of the strongest people in the Wrestle field at a very young age. Further, he faced competitors like Cody East, Daniel Omielanczuk, Oleksiy Oliynyk, and Mark Hunt and he defeats all of the matches.

Likewise, he is to face Dutch mixed martial artist and former kickboxer, Alistair Overeem at the UFC 225 on 9th June 2018.

Curtis Blaydes is having an affair with his long-term girlfriend, Alexandria. The duo has shared several romantic moments on their Instagram pages.

As on 23rd February this year, his girlfriend announced her pregnancy and mentioned that she is comfortable with herself and enjoying this new level of confidence through her Instagram account.

The boyfriend-girlfriend might have tied a knot secretly, although, they have yet not published regarding their married life.

Curtis Blaydes is a leading mixed martial artist who is competing for the heavyweight division of the UFC. As per the sources, his career disclosed earning is $108,000 including the prize money, bonus and so on.

Altogether, in 2018, he shares an estimated net worth of $850,000. Besides his fighting, he makes few of the money from endorsement. Currently, he lives a luxurious lifestyle in the house situated in Chicago. He owns one black and one white Mercedes car in his collection list.

He is a pet lover and has got one pet dog in his house. He is also passionate about the tattoo and has got several tattoos on his body.