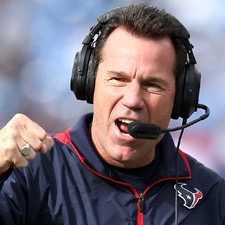 Gary Wayne Kubiak is a former professional football player and coach who is best known for his roles in American Football Team, Huston Texans and Denver Broncos. Earlier, he used to play for the team, Denver Broncos as a quarterback wearing a jersey number of 8. Gary is renowned for winning Super Bowl 50 as head coach and three Super Bowl as an assistant.

Gary Wayne Kubiak was born on August 15, 1961, in Houston Texas, the United States. He was born to Alfred Kubiak, father, and Willie Mae Kubiak, mother. Likewise, he grew older along with his sister named, Susan Pierce. Gary holds an American nationality and belongs to white ethnicity.

Multitalented Gary first attended St. Pius X High School and played as quarterback for its team. At that instant, he was an All-state champion in football, basketball, track, and baseball. Likewise, he was also given a nickname of Koob for his incredible talents. Gary completed his education from St.Puis in 1978, and then joined Texas A&M University to pursue his further career.

At Texas University, he played for four seasons where he was also selected as All-Southwest Conference team. During the end of his career, there he set the conference records by passing 4,078 yards, 27 interceptions, and 31 touchdowns. Afterward, Gary began his professional career after he got selected in the eighth round of the 1983 NFL draft.

Gary served his entire career with the Denver Broncos as a backup for the American Hall of Famer, John Elway. There, he played for nine seasons and ended his football career as a player and began coaching. His coaching journey began from his college, Texas A&M and served as a running backs coach for two seasons 1992-93.

Giving his majority of time at his coaching, subsequently, he joined National Football League (NFL) as an assistant coach for San Francisco 49ers in 1994. After that, he served for the Denver Broncos,( 1995-2005), Huston Texas(2006-2013), Baltimore(2014). As of now, the talented Gary has won numbers of awards such as

Gary returned to his club Denver Broncos and served there as a head coach after serving for the team, Baltimore Ravens. Since then, he has been serving for it. Currently, on January 1, 2017, Kubiak announced that he is stepping down from his head coach position due to health issues.

Hardworking and handsome, Gary is a married man. He married to a beautiful woman, Rhonda Kubiak on June 5, 1983. The couple is blessed with three sons named, Klein, Klint and Klay Kubiak. His son Klint was a wide receiver coach for the Rice University and coach at the University of Kansas. Similarly, Klay was a quarterback at Colorado State.

The husband and wife have been together for more than 30 years, and till date, there has not been any serious conflict between them. Their relationship describes as one of the perfect couples. Gary seems a decent man as he provides equal time to his career and family and has not bruited in extramarital affairs. Neither his wife is.

Gary Wayne Kubiak has earned a decent amount of money from his multi-career. He makes a huge money mostly from his coaching career. As of 2017, his net worth is calculated at around $18 million.