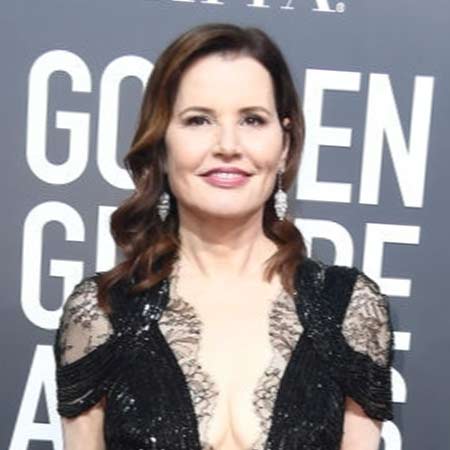 Geena Davis is an American actress, writer, producer, former anchor and former model most known for her roles in The Accidental Tourist, A League of Their Own, Stuart Little, Thelma & Louise and The Fly.

Further, she was nominated for the Academy Award for the category of Best Actress along with the co-star Susan Sarandon for Thelma and Louise.

Geena Davis was born on January 21, 1956, in Wareham, Massachusetts to Lucille and William F. Davis. Her father was a church deacon and a civil engineer whereas her mother was a teacher’s assistant. She has an older brother, Danforth. She holds the American nationality and belongs to White American ethnicity.

Since her childhood days, she was interested in music. She joined Wareham High School and then attended New England College. When Davis was enrolled at her high school, she felt left out as she was one of the tallest girls. She completed her graduation with a bachelor’s degree in drama from the Boston University. Following her education, she served as a window mannequin for Ann Taylor.

The talented actress was interested in the field of music and was perfect for playing flute and piano, but she began her professional career as a model. She was cast by a director Sydney Pollack in his movie Tootsie. Then she followed the part of Wendy Killian in the short television series named Buffalo Bill.

In 1983 she featured in an episode of the Knight Rider named K.I.T.T. the Cat. Then she appeared in several movies like Beetlejuice, Fletch, and The Fly. Her role in the film, The Accidental Tourist, helped her to earn Oscar Awards for the category of Best Supporting Actress.

In 2015, it was announced that she would be featuring in Marjorie Prime, an American science fiction film. The following year she featured her role in The Exorcist.

Geena Davis is a happily married woman. She is married to Reza Jarrahy on September 1, 2001. The duo was blessed with three children; a daughter (Alizeh Keshvar Jarrahy), and twin sons (Kaiis Steven Jarrahy and Kian William Jarrahy).

The Oscar Award-winning actress, Geena Davis is living a luxurious life. Geena Davis’s net worth is reported to be around $38 million. Moreover, her salary from The Geena Davis Show as per the episodes is estimated to be $200,000.

Furthermore, she earned $7,000,000 from the movie Cutthroat Island.