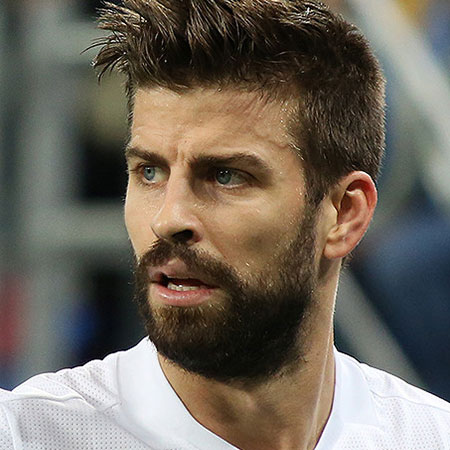 Gerard Pique is a Spanish professional football player who plays in a center-back position. He currently plays for FC Barcelona as a center-back.

Gerard was born on 2 February 1987 in Barcelona, Catalonia. Before starting his career in FC Barcelona as a defensive midfielder he decided to join Manchester United. He was not paid the desired fee as he was too young to have a professional contract.

In October 2004, he decided to debut for Manchester United. On 29 March 2006, he made his full debut against West Ham United in a Premier League match at Old Trafford. He made in replacement of Gary Neville as he was injured. In February 2005 he signed a new contract. On August 4, 2006, he was on a season-long loan in which he had to feature in at least 20 games. In the UEFA Champions League, he scored on his first start on November 7, 2007. The match was against Dynamo Kyiv. By scoring one goal he became the 450th player to score one goal for the club. On 12 December 2007, he scored his second goal against Roma in the Champions League.

With 5 million euros, he signed four-year contract with Barcelona. On November 26, 2008, he scored his first goal against Sporting CP for Barcelona in the Champions’ League group stage. On January 29, 2009, he scored his first domestic goal against Espanyol in a Copa del Rey match. He scored his sixth goal against Real Madrid in El Clasico on May 2, 2009. The club picked up the trophy on 13 May 2009 as he helped the club to win over Athletic Bilbao in the Copa del Rey Final. In the 2009 Champions League Final, he played against his former club Manchester United. The match was won by Barcelona. In the 2009 FIFA Club World Cup Final, Barcelona team beat Estudiantes by 2-1. On February 26, 2010, he extended his contract with the club Barcelona. He scored a goal against Internazionale on April 28, 2010. On May 1, 2013, he scored an own goal for Bayern Munich. He again signed a contract with Barcelona to keep him at the club until 2019. Barcelona won fifth European Cup by defeating Juventus.

On 6 February 2009, he played a friendly match against England. At the 2009 FIFA Confederations Cup, he made his tournament debut for Spain. He played every minute of Spain’s UEFA Euro 2012 campaign.

His father name is Joan and his mother name is Montserrat. His father is a business man. He also has a younger brother named Marc. His grandfather name is Amador Bernabeu. He was in a relationship with Shakira since 2010. Shakira is a Colombian singer. The couple first met each other during the shoot of her official song of the 2010 FIFA World Cup “Waka Waka”. She is 10 years senior to him. The couple is blessed with two children named Milan Pique I Mebarak and Sasha Pique i Mebarak. Since his childhood, he has been close to Cesc Fabregas.