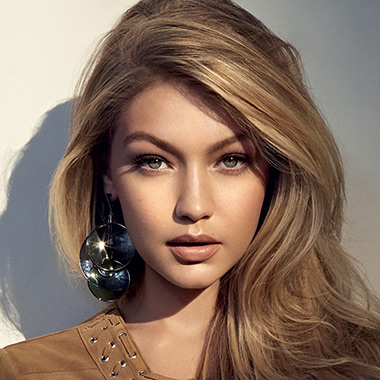 Gigi Hadid is a hot and sexy American fashion model and TV personality. In 2014 she became one of 12 rookies in Sports Illustrated annual swimsuit issue. She also made appearances on The Real Housewives of Beverly Hills. She was seen in magazines including Grazia, Vogue, VMAN, Cleo, Schon! Magazine, Elle and Sports Illustrated. She also became the face of Guess in 2012. She was on the cover of Galore magazine. In March 2014 she was on the cover of Schon! Magazine.

Gigi was born on April 23, 1995, in Los Angeles, California, United States. She was born to Mohamed Hadid and Yolanda Foster. Mohamed is a Palestinian real estate developer and Yolanda is a former Dutch model. She has a sister named Bella and a brother named Anwar. Bella is also a model. By her dad side, she has two older half-sisters and five step-sisters. Her parents later got divorced. Her mother got married to David Foster making him her stepfather. David is a music producer. She attended Malibu High School and graduated in 2013. She was only 8 years old while graduating. While she was in her school she was the captain of her volleyball team and was also a competitive horseback rider.

In 2011, she signed a contract with IMG Models. When she was two years old she started her modelling career. She was discovered by Paul Marciano of Guess. She first worked with Baby Guess. She then later stopped modelling to concentrate on her studies in school. Later she got back to modelling and continued working with them. In 2012 she became the face of the Guess campaign. As an adult, she did 3 campaigns with Guess. She said that in her recent interview. She made her debut in New York Fashion Week debut in February 2014 by walking the catwalk at Desigual’s show. She also debuted at Jeremy Scott’s show. She appeared in a music video which was played by Australian singer Cody Simpson in his song Surfboard. The song was officially released on April 14, 2014. She then appeared on another music video as she played the love interest of American Grammy winner singer Miguel “Simplethings”. The song was released on May 29, 2014. She then starred along with model and actor Patrick Schwarzenegger on Tom Ford’s new Eyewear autumn/winter campaign on July 15, 2014. On September 5, 2014, she co-hosted Daily Front Row’s Fashion Media awards in New York City. She will be seen in 2015 Pirelli calendar. She recently walked for Jean Paul Gaultier SS15 last RTW Show. She became the newest face of Maybelline in January 2015 after finalizing her major contract.

For a year she was in relation with Australian singer Cody Simpson. In May 2014 they broke up. On June 2, 2014, they reunited after People magazine reported that he wanted to reconcile. Later the couple again split which was reported on August 5, 2014. Later in November 2014 they patch up. After that, they are seen together in several occasions and events. They spent their 2015 New Year holiday together in Dubai with their friends Selena Gomez and Kendall Jenner.

She was awarded First Annual Fashion Los Angeles Award as Model of the Year in 2015.