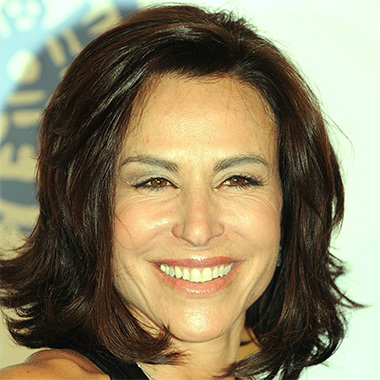 Giselle Fernandez is an American television journalist. She also appeared as reporter and guest anchor for NBC Today, CBS Early Show, NBC Nightly News and CBS Evening News. She had also worked as a regular host for Access Hollywood.

Giselle was born on May 15, 1961, in Mexico City, Mexico. When she was four years old, she was brought to East Los Angeles in the United States. She was born to a flamenco dancer father and a Mexican folklore student mother. Her mother is Jewish while her father is Catholic. She studied at California State University, Sacramento. She graduated from there in 1982 holding B.A. in Journalism and Government degree.

In 1983 she began her television career working at KRDO in Pueblo, Colorado, and KEYT-TV. She also worked as a television reporter and weekend and anchor in KTLA (Los Angeles), WBBM (Chicago) and WCIX (Miami) from 1985 until 1989. She gained some controversy in Chicago while she went boating with John Cappas. In October 1991 she gained her first national news job for CBS News. She became a correspondent and back-up anchor for the morning, evening and weekend new broadcast when she moved to New York City. She then later moved to NBC. She worked as an anchor at the Today Show and the Sunday NBC Nightly News. She also took various special reporting assignments in the U.S. She has reported on the 1989 U.S. invasion of Panama, a scud missile attack while covering the Persian Gulf War, the crisis from Cuban immigration, the trial of the conspirators from the 1993 World Trade Center bombing and unrest in Haiti.

She also took rare interview of, then president of Cuba, Fidel Castro. She co-hosted Access Hollywood from 1996 to 1999. Access Hollywood is an entertainment new program on NBC. She later co-hosted This Week in History. In October 2001 she joined KTLA television news. In August 2003 she left the position to pursue a variety of special projects which includes making a movie and writing children’s books. She released her book titled Gigi and the Birthday Ring which was published by the Laredo Publishing Company in 2004. She has her own production company, Skinny Hippo Productions. She herself is the president of it. She is also a co-president of F-Squared Productions, where she works as a developer of film and television projects.

She has been awarded Emmy Awards for journalism for five times. The Association of Fundraising Professionals named her as the year’s Outstanding Philanthropist in 2006.

While she was in Chicago, she met Ron Kershaw. Ron was previously involved with Jessica Savitch. They both were engaged but unfortunately, Ron died because of pancreatic cancer and liver cancer. Her father also died a month later due to Alzheimer’s disease. She is divorcing former CEO of Panavision, Inc., John Farrand. She is asking for $43000 per month. In January 2006 she took part in Dancing With The Stars second season.