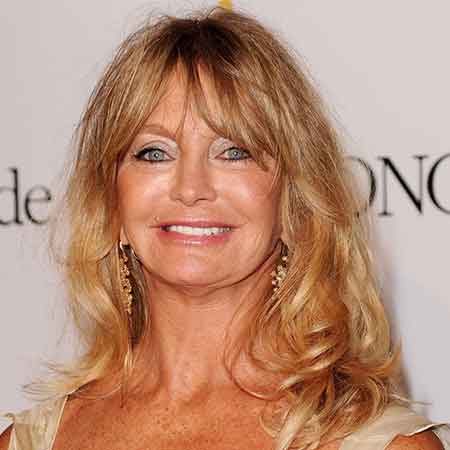 Goldie Hawn is an American actress, producer, and occasional singer better known for her appearance in Rowan & Martin’s Laugh-In. Hawn was married twice but both of her marriages ended with a divorce.

From her previous marriages, Hawn had two children. Currently, Hawn is living with her boyfriend Kurt Russell. For her performance in Cactus Flower Haws received a Golden Globe Award for Best Supporting Actress.

Goldie Hawn was born on 21st November 1945, in Washington, D.C., United States. Her mother Laura Hawan was a jewelry shop/dance school owner and father Edward Rutledge Hawn a band musician. Hawn has a sister Patti Hawn who is a publicist.

Hawn belongs to an American nationality. She attended the Montgomery Blair High School. However, Hawn dropped out from the American University.

Goldie Hawn made her acting debut through the 1967 series Good Morning, World. She played the role of Sandy Kramer in the series until 1968. Hawn gained a wide recognition for her performance in the show Rowan & Martin’s Laugh-In.

Likewise, Hawn made her movie debut through The One and Only, Genuine, Original Family Band in 1968. She then starred in the movies such as Shampoo, Best Friends, Housesitter, etc. Alongside, Pamela Anderson, Hawn starred in 2017 movie SPF-18.

Goldie Hawn was married twice but both of the marriages ended up with a divorce. Hawn was first married to Gus Trikonis who is a dancer. The couple exchanged their vows on 16th May 1969. Their wedding was held at Honolulu, Hawaii.

But they failed to continue their relationship and divorced on 22nd June 1976. After that, Hawn began dating Bill Hudson to whom she met on a first-class flight from New York to L.A. The pair exchanged their vows on 3rd July 1976.

From their relationship, the duo had two children. They welcomed their first child, a son Oliver Hudson on 7th September 1976. Similarly, their daughter Kate Hudson was born on 19th April 1979. However, even being the parents of two kids, the pair failed to continue their relationship.

On 19th March 1982, Hawn and her ex-husband Bill divorced. Currently, Hawn is living with her partner Kurt Russell. The lovebirds have been together since Valentine’s Day 1983. They have a son Wyatt Russell born on 10th July 1986.

So far, the couple hasn’t faced any rumors of divorce and extramarital affairs. Besides this, Hawn further dated several other guys including, Spiro Venduras, Warren Beatty, and Ted Grossman. Moreover, she also dated Bruno Wintzell, Victor Drai, and others.

Goldie Hawn earns a good sum of money in her career. She has featured in several movies and tv series through which she receives a decent amount of money as salary. Allocating information from several sources as of 2018 it is found out that Goldie Hawn currently estimated net worth is around $60 million.

Hawn earns a tremendous amount of money from her multiple careers. Starting her acting career in 1967, Hawn is still active in the same field.  Yet, Hawn has starred in numbers of movies and television series.  A Golden Globe Award-winning actress, Hawn has maintained a lavish and luxurious life.