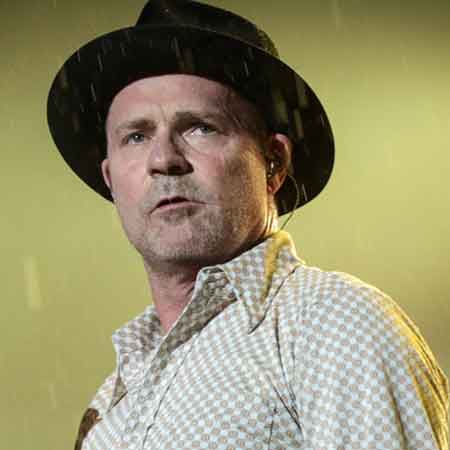 A Canadian rock singer and songwriter, Gord Downie was a lead singer of the native rock band The Tragically Hip. He is widely known as one of the most influential Canadian alternative rock scenes.

Gord died of brain cancer named as Glioblastoma, on 17th October 2017, at the age of 53 in Toronto. In 2015, Gord and his wife, Laura Leigh, got separated. It was before Gord Downie was diagnosed with brain cancer

Gord Edgar Downie was born on 6th February 1964 in Amherstview, Ontario, Canada. He was born to father, Edgar Charles Downie, and mother, Lorna (Neal). He grew up along with his siblings Mike, Patrick, Charlyn, and Paula, in Kingston Ontario.

Growing up with his siblings in Kingston, Downie attended the downtown Kingston high school. He was interested in music from his childhood which made him enroll at the Kingston Collegiate and Vocational Institute.

Firstly, Gord formed the band The Tragically Hip along with his Rob Baker, Johnny Fay, Davis Manning, and Gord Sinclair, in 1983. But as time passes, Davis left and Paul Langlois joined the band.

The Tragically Hip band was able to establish themselves in local bars and areas. They came in limelight as MCA Records president Bruce Dickinson saw them performing at the Horseshoe Tavern, Toronto and offer them a deal to record.

Later, in 2001, Gord started his solo musical journey and released his first solo album Coke Machine Glow whereas his second album Battle of the Nudes in 2003. With the raising of fame, Downie traveled different places for a concert and was able to make a huge fan following.

Similarly, Gord released his third single album, The Grand Bounce, in 2010. He had also collaborated with Buck 65, The Sadies, Fucked Up, Terfry, and with much more artists. Moreover, he had also appeared as a guest vocalist on City and Colour’s single “Sleeping Sickness”.

Furthermore, Gord also released his solo album Secret Path in 2016 and his final solo double-album titled Introduced Yourself in September 2017. His final tour concert was on 20th August 2017, which was held at the Rogers K-Rock Center in Kingston, Ontario.

The concert was broadcast live by the Canadian Broadcasting Corporation on television and also streamed lived on the radio as well as the internet. It was estimated that Gord Downie last concert was viewed by 11.7 million people around the globe.

Furthermore, Gord also won a Canadian Screen Award twice for the television version of Secret Path. The program also won the Donald Brittain Award for the Best Political or Social Documentary Program as well as Best Music in a Non-Fiction Program.

Gord Downie Cause of Death

Gord died of brain cancer named as Glioblastoma, on 17th October 2017, at the age of 53 in Toronto. The Tragically Hip announced that he was diagnosed with a terminal brain tumor on 24th May 2016.

Gord was married to his long-term girlfriend, Laura Leigh Usher. She was also suffered from breast cancer but survived. The couple welcomed four children. After several years of their marital relationship, the dup started having problems in their relationship which created a huge difference in them.

In 2015, Gord and his wife, Laura Leigh, got separated. It was before Gord Downie was diagnosed with brain cancer. He was also the godson of Harry Sinden. Harry is a former hockey coach as well as general manager and president of the Boston Bruins.

Moreover, Gord also received a decent amount of money from several brands and fashion lines as an endorsement. Allocating information from several sources as of 2017 it is found out that Gord Downie estimated net worth was around $10 million. Gord lived his life happily and had a lavish lifestyle.