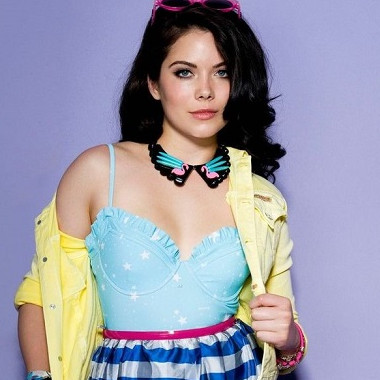 American actress, singer, and dancer, Grace Phipps is best known for her roles as “Amy Martin” in the television series, The Nine Lives of Chloe King and “April Young” in The Vampire Diaries.

She is currently an undergraduate student at Columbia University. She has attended and worked at San Antonio’s Magik Children’s Theatre for most of her childhood and adolescence. She won the Las Casas Performing Arts Scholarship Competition in 2010.

After her high school graduation, Phipps moved to Los Angeles to pursue a career in acting. She made her prime role as spunky Bee in the DreamWorks 2011 major movie remake of the 1985 comedy horror film “Fright Night”. The same years, she landed the regular role of Amy in the ABC Family fantasy drama series “The Nine Lives of Chloe King”.

From 2012 to 2013, she was cast as April Young, a recurring character who plays an edgy natural beauty in The CW’s supernatural drama “The Vampire Diaries”. In 2013, Phipps appeared  “Teen Beach Movie” playing the role as cute biker girl Lela. The movie Teen Beach was the second-highest-rated cable movie in television history, with an audience of 13.5 million viewers.

Phipps appeared in three episodes of the ABC TV comedy series “Baby Daddy”; in the fantasy horror TV series “Supernatural” as Hael; and in the short “The Signal” as Zoe. She also landed a lead role in the film “Some Kind of Hate”, which was featured in the 2015 Stanley Film Festival. Additionally, she appeared in the police procedural drama TV series “CSI: Cyber” as Vanessa Gillerman, and in the police procedural TV series “Hawaii Five-0” as Erica Young.

In 2014, Phipps appeared in the Austin & Ally episode “Directors & Divas” and performed “The Pilot and the Mermaid” with Ross Lynch. In 2015, her song “Gotta Be Me” from Teen Beach 2 was nominated for the Teen Choice Awards as the Choice Song from a Movie or TV Show; she sang the song with Ross Lynch, Maia Mitchell, Garrett Clayton, John Deluca, and Jordan Fisher.

Living her mid-20s, she is busy driving her career and so far there is no information about her dating history. However, a rumor exists that she is dating her “Teen Beach 2” co-star, Garrett Clayton. She has shared the screen with a different actor in movies and TV shows but has not outed anything about her real relationship and romance. Like other celebrities, the gorgeous 5 ‘2 actress is also active on social networking sites like Instagram, facebook, and twitter. According to the source, her current net worth of $5,000,000.