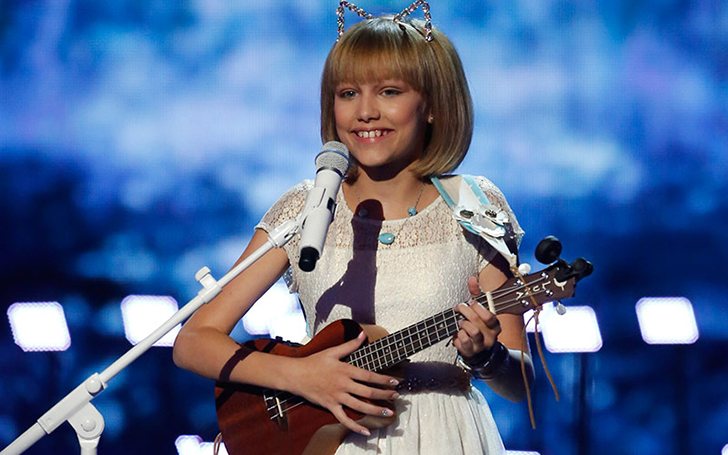 Grace VanderWaal is a child singer and songwriter, who has become an overnight celebrity from her audition on the 11th season of America’s Got Talent. Her first audition video has been viewed by over 36 million peopled as of September 2016. Vanderwall won the show at the age of 12 by defeating The Clairvoyants; Thommy Ten and Amalie van Tass on 14 September 2016.

Grace Vanderwall was born on 15 January 2004, to become the second daughter of Tina Vanderwall (mother) and Dave Vanderwall (father). Origin from Suffern, New York, she and her older sister, (also best friend) Olivia Vanderwall was born and raised in Kansas City metropolitan area, Kansas , U.S. Vanderwall started writing songs from a very young age of three when most of us would not know how to write. She has been accompanied by her supportive parents and family. She is a shy and quirky person and her friends in school and neighbors do not know that she sings until she appeared on AGT.

Like everyone, Grace Vanderwaal humbly stepped onto the AGT stage and immediately charmed the judges with her sweet honest attitude and demure. The singer even admitted that she has never performed in front of a crowd before. During her first audition, which aired on 7 June 2016, Vanderwall performed her original song for thr judges called “I don’t Know My Name”. Her performance surprised everyone; Nick Cannon, presenter of the show shocking said “I don’t expect at all”. Howie Mandel commented on her saying “ You are living, beautiful, walking miracle”, while other judges gush away. Simon Cowell, described her as the “Next Taylor Swift”. She was immediately sent to Las Vegas for the live round by earning a Golden Buzzer from Howie.

Unlike most of her opponents on AGT, Vanderwall writes and sings her own song. This has made her original artist like Taylor Swift. Her songs are quite catchy and lovable. America’s Got Talent season 11 finale was aired on 14 September 2016, in which Grace Vanderwallperformed her hit song “I Don’t Know My Name” and introduced Stevie Nicks, who performed “Landslide”. After Nicks’ performance, she compliments on Grace VanderWaal and compared to herself “ We like to be quirky, we like to be a little weird and different”.


Grace Vanderwall who has inspired many youths around the globe was crowned the winner of the America’s Got Talent (AGT) 11th season on 14 September 2016. Taking home $1 million dollars and when asked how will she use the money, Vanderwall’s reply was unlike other songwriter and singer. She planned to give charity and reminding her age, she added “but I want to go on Treehouse Masters and I want to get a treehouse.”

Grace Vanderwall soon became the headline of every news media. She was invited to many variety show including, Access Hollywood Live’s Natalie Morales and Kit Hoover, where she reveals how she felt when she heard her name announced as the champion by host Nick Cannon. Her mother and father joined her on the show and sings for Natalie and Kit. So far, this talented breathtaking singer has not yet confirm regarding her record deal. What is not certain is whether her parents will choose the $25,000 annual payments or “the present cash value” of the estimated annuity of $400,000.

It was announced that VanderWaal will be performing at the PH Showroom at Planet Hollywood Resort and Casino with runners-up The Clairvoyants (mentalists Thommy Ten and Amelie van Tass) and Tape Face (aka New Zealand busker Sam Wills) from October 27-29, 2016.

There has been many controversies and conspiracies regarding, Grace VanderWaal future. Many media raised questions on whether she will end up like Miley Cyrus. Social media also talked about her regarding her career but Vanderwall has not yet replied to any of this. She joined Twitter in March 2016 and in just 4 months she has managed to grabbed 173, 000 followers.