Tesla Motors unveiled the first look of its new car “Model 3” at the Tesla Motors Studio in Hawthorne, California. Tesla’s new product Model 3 is believed to be most powerful and affordable with supercharging abilities. No doubt because Tesla Motors has already proved it’s caliber from its previous successful models such as Roadster, Model S and Model X , the new model “Model 3” is expected to be a huge success in the era of electric car-making.

Elon Musk, CEO of Tesla Motors, who was introduced by the Chief Executive Designer Franz Von Holzhausen at the unveiling event, confirmed that the price of Tesla Model 3 will be $35,000. He further confirmed that it will be a high volume product with 215 stores and services in Asia, North America, and Europe. He also revealed his plan to expand the number of stores and services to 441 within next year.

Currently, Tesla cars receive services from 3,608 superchargers and 3,689 destination charges. Next year, there will be about 6,000 superchargers and more than 15,000 destination chargers, so that Tesla Motor riders can travel all around the world with sufficient energy. The best thing about charging Model 3 is that it can adapt to all kind of voltage, which indicates that Model 3 riders will be tension free riders unless they move to the place without electricity.

Tesla Model 3 can fit 5 adults comfortably. The designing team has moved the front seat forward and compressed the instrumental panel creating more leg space for back seats. The compressed panel and front seat make drivers feel great and comfortable. Model 3 is incredibly safe car and A-one in every category. It contains a single piece of glass from rear to front which gives the sense of openness and freedom. A good thing for frequent travelers and surfers is that Model 3 contains both front and back trunk and can fit 7ft long surfboard inside it.
Model 3 has an excellent performance with 0-100 km in less than 6 seconds and runs 346 km /charge. Its exterior is also stylish and attracting, and 1,15,000 pieces are already ordered and booked. You can order for yourself at www.tesla.com. The delivery will begin next year. 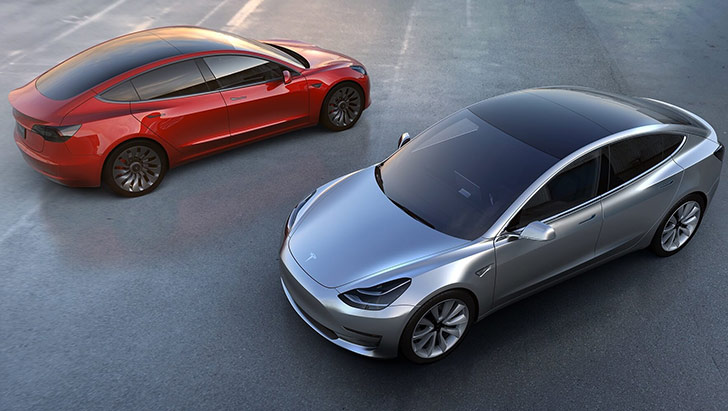 Price- $35,000
Stores and Services- 215 Stores around the world which will be doubled next year
Superchargers and Destination charger– 3,608 superchargers and 3,689 destination chargers which will be double and quadrupled next year respectively.
Cost– It takes almost all the revenue from Model S and Model X to create Model 3.
Giga Factory– Model 3 is high volume production, so Tesla Motors set up Giga factory in Nevada which has the largest footprint than any other building on earth, and it is second to Boeing Everett Factory volumetrically. It will produce the greatest lithium ion cell more than any other factory combined.