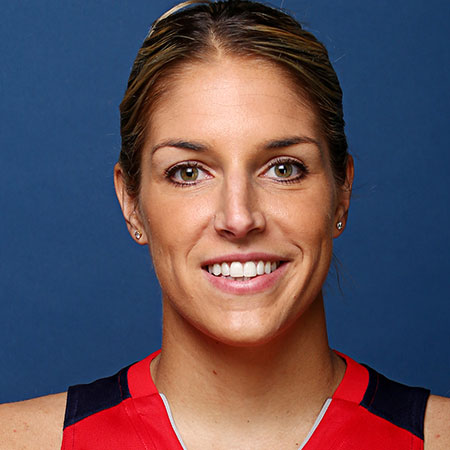 Elena Delle Donne is an American basketball player who has been playing professionally in WNBA for Chicago Sky since 2013.

During her spell in Ursuline, she helped the team to win three Delaware State Championship titles. She received national recognition for her record-breaking score of 2,000+points that she earned throughout her high school career. She made 80 throws during the 2005-2006 season. Similarly, she received an induction to WBCA All-American and received MVP honors for the Red Team after her game-changing performance in the 2007 WBCA High School All-America Game.

Besides Basketball, she was also in high school volleyball team and led her team to clinch DIAA state championship in 2007.

Recognizing her glorious high school career, University of Connecticut provided her a basketball scholarship. But her close connection with her family stopped her from joining the University, as she would have been far from the family if she had joined the University. After rejecting the scholarship from Connecticut, she joined the University in her hometown, University of Delaware. At Delaware, she started to play volleyball for the University’s team and helped her team to finish the season with a record-breaking performance of 19-16 (their previous season performance of 9-5). In 2009, she left the volleyball team and started to play basketball for Delaware Blue Hens as a freshman.

She concluded her freshman career with an average of 26.7 points She  was named the CAA Rookie of the week six times during the 2009-2010 season.

In her sophomore season, she had a tough time after she was diagnosed with Lyme disease. Despite illness, she led her team to three conference tournament finals. In her junior season, she lured fans to the Blue Hens games. As a result, the attendance at Blue Hens games rose up to 250 percent from the previous year. In the 2012-13 season, again her illness brought her down and she missed four games. She came back to the court on December 12 in a game against Maryland, luring the largest crowd ever at the Bob Carpenter Center.

Her glorious collegiate performance helped her to get a position in 2013 WNBA draft, where Chicago Sky signed her. During her tenure, Chicago Sky got a chance for the playoffs for the first time. Due to her illness, she couldn’t give her best as a Chicago Sky player but showed her strong presence on the court. Despite her back injury,  Donne helped the Chicago Sky to reach WNBA finals and scored 45 points in the final two games after taking medication.

Donne was on the USA Basketball Team in 2011 and with her average 15.7 points, 8.5 rebounds, and 3.00 assists, the team clinched the World University Games title. Due to the back injury in 2014, she missed the chance to play from U.S. team in 2014 World Championship.

She has a very close connection with her older sister, Lizzie, for whom she rejected the scholarship offer from Connecticut. Lizzie is blind and deaf, and she is a patient of cerebral palsy. During off season period, she spends most of her time with her sister Lizzie. She always wants to keep herself very close to her sister and parents Ernie and Joanie.