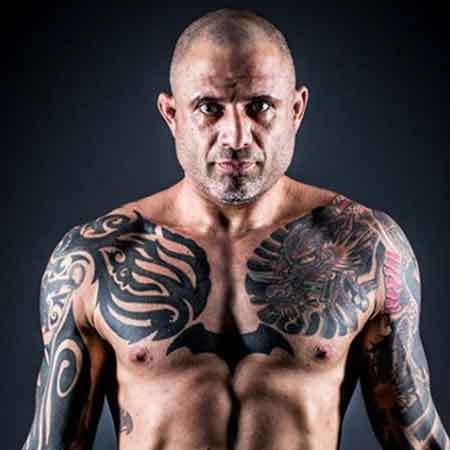 The Israeli mixed martial artist, Haim Gozali is well known as the Batman in the octagon. He currently competes in the Welterweight division of Bellator MMA. The fighter has a 4th-degree Jiu-Jitsu black belt under Renzo Gracie. He is the first Israeli to compete in the Madison Garden. He has a record of eight wins and five losses.

Haim Gozali was born on May 6, 1973, in Bat Yam, Israel. The information regarding his parents is unknown. He is of Israeli nationality. He is fluent in Hebrew as well.

The fighter has also served as a soldier in the Israeli Army.  Gozali has a security company. He is the president of ADCC Israel. He also worked as a security guard for some time. While working as one, he was stabbed by someone in his right hand. He had to go through five surgery to fix his hand.

Gozali began his professional career through Israel Fighting Championship in 1998. His debut bout was against Carlos Newton. He was defeated in the fight. He then experienced a five winning streak against his opponents including Maer Kobi Coen, Dan Koan, Alcs Plotkin. The fighter got his nickname because he is a huge Batman fan.

After that, the fighter fought in the Jungle Fight, Mayor Cup, and Anaconda Fight. He lost against Ronaldo Souza and Rustam Bogatreyrev in the events. On the other hand, Gozali was victorious against  Zdravko Zdravkov.

Gozali was eventually signed by Bellator MMA. His debut Bellator bout was against Zane Clerk on November 10, 2016. He won the fight via a submission. The fighter then fought Ryan Couture in the Madison Square Garden becoming the first Israeli to do so. However, Gozali lost the bout.

After that, Gozali has won against Mykyta Mikhno. His latest fight was against Jose Campos on January 20, 2018, in which he lost via decision.

Regarding Gozali’s personal, he likes to keep things private. There are no rumors of him dating anyone as of now. It is also unknown if the fighter has married. However, judging from his social media, the fighter is perhaps unmarried. He has not posted any pictures with potential partners.

Gozali is much focused on his career at the moment. Perhaps he hasn’t had the time to engage in relationships. The fighter could also be dating someone in private. Either way, he is not big on sharing his personal life with the fans.

Gozali has been able to earn a lot of money due to his successful MMA career. At the moment, his net worth is under review. He was reportedly paid, $10,000 for his bout against Jose Campos. He also earns a lot through his security company.

The fighter earns enough to live a comfortable lifestyle. He is a proud Israeli and loves being able to represent his country in the world. He is still active in his career so we can assume that his net worth will rise in coming days.