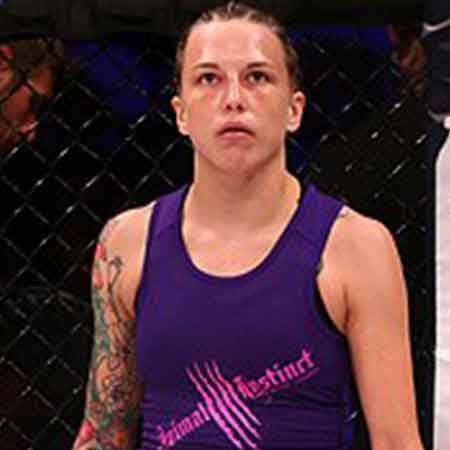 Jessica Middleton, widely known by her nickname Million Hits is an American mixed martial artist who currently competes in the flyweight division of Bellator MMA. She began her professional Bellator MMA career in 2016. Her total MMA career record includes 2 wins, 3 loss, and 0 draws.

Middleton is a married woman and has two children.

Jessica Middleton was born on 15th May 1988, in Wichita, Kansas, United States. She belongs to an American nationality and holds white ethnicity. However, Middleton hasn’t revealed any information about her parents and siblings. Moreover, her education background is also still unknown.

Before her professional career, Jessica Middleton made a total amateur record of 2 wins and 1 loss and 0 draws. During her amateur career, Middleton competed at GFA on 13th June 2015 and got the victory over Nici Kearney. However, she lost her second fight over Julie Murray at TBC.

Likewise, Middleton further won the fight over Julie Murray at VFC 50. In 2016, Middleton began her professional MMA career signing with Bellator. She made her Bellator debut on 22nd July 2016, against Bruna Ellen at Bellator 159 which she won via decision.

She has a son and a daughter. Her daughter’s name is Ava however, Middleton hasn’t revealed the name of her son. He son is a Jiu-Jitsu fighter as well as a baseball player. Middleton is living happily with her children and father and often shares beautiful pictures of them on Instagram.

Besides this, there are no any rumors of her divorce as well as other extramarital affairs. Moreover, Middleton hasn’t dated any other guys in past.

Jessica Middleton has maintained a standard life. Her main source of income is from her MMA career and has earned a good sum of money from it. Till date, Middleton has competed in several championships and has won several of them.

Allocating information from several sources as of 2018 it is found out that Middleton current estimated net worth is around $1 million.