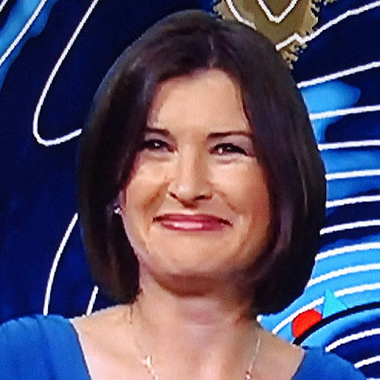 Helen Sarah Willetts was born on February 10th of 1972 Chester, England. She studies in Eirias High School in Wales. She also achieved degree in Physics from the University of Nottingham. She was the international badminton player for Wales before entering to Met Office in February, 1994 where she was trained for forecasting.

In the July of the same year she went to Cardiff Weather Centre and began to forecast on Radio in Wales and in BBC Television. In 1997 she accomplished her final training and she was shifted to London to work on BBC News 24. Now she is regularly hosting shows on BBC. She is hosting BBC news, BBC Red Button, BBC Radio 4, BBC Radio 5, BBC World News, BBC One, BBC News at Ten and also BBC Radio 2. She is weather girl on BBC news at Ten and in BBC News Channel. Helen Willetts is meteorologist on BBC Channel. She also has regular shifts on BBC breakfast. She once said that she find her job exciting, challenging and demanding. She even hosted the forecasting when she was pregnant and the concerned viewer recommended for chair. Helen Willetts was awarded Television and Radio Industry Club award (TRIC) in 2006 for best TV weather forecasting. In 2007 University of Nottingham awarded her an honorary degree.

In 2004 she tie knot to Philip Boulby and it was celebrated in Clowny Bay, Wales. She has 2 two child with Philip in 2006 and 2008. She took break from forecasting while she was pregnant. She was the topic on the Digital Spy blog which is TV news discussing blog, for forecasting during the pregnancy. There were various comment which criticizes the forecasting program for making pregnant women stand-up. Her growing belly was hot subject in internet chatrooms and blog. You can also see her YouTube videos dedicated to her pregnancy.

In October 2014 she went viral through media and the internet once again for appearing double on screen at once during BBC weather bulletin. This technical problem was titled Willetts Double Trouble throughout the news. That was the technical problem on weather graphics of BBC Channel where Helen was seen double instead of single. On that program, another Helen was seen presenting program behind the first Helen. She is very successful in her career despite being the mother of two. She is still forecasting the weather in BBC with the huge number of concerned viewers and followers.