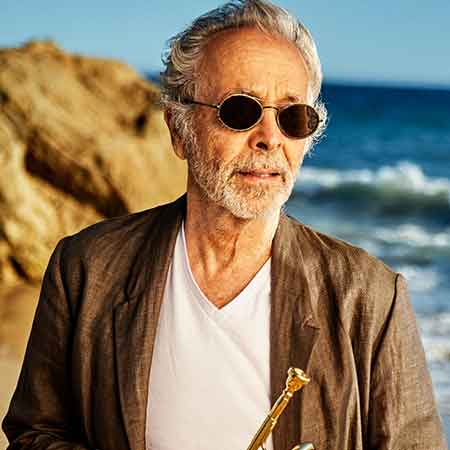 Herb Alpert married twice in his lifetime. Firstly he married to Sharon Mae Lubin from 1956 to 1971 and welcomed two children, and later married to Lani Hall in 1973 and welcomed one daughter.

Herb was born on 31st March 1935 in Los Angeles, California. He was born to mother Tillie (nee Goldberg) and father Louis Alpert and grew up in Boyle Heights which is a part in Los Angeles. His parents were emigrants to the United States from Radomski.

Alpert’s brother David Alpert was also passionate about music from his childhood. He played drums and was also interested in playing the trumpet. Herb also has a sister named Mimi Alpert.

Alpert attended the University of Southern California in 1950 and was the member of the USC Trojan Marching Band for almost two years. During his University days, he had appeared in the uncredited role in The Ten Commandments.

After graduation, Alpert teamed up with burgeoning lyricist Rob Weerts and started his jazz career as a songwriter for the Keen Records.

Herb started his career setting up a small recording studio in his garage and overdubbing a tune which is famously known as “Twinkle Star”. He debuts his first album The Lonely Bull which peaked 6th on the Billboard Pop Singles chart.

Alpert released several albums afterward which were successfully hit around the globe. His albums were so much success that he even set the Guinness Book of World Records for placing five albums simultaneously in the Top 20 on the Billboard Pop Album Chart.

During his Jazz career, Herb Alpert released five No. 1 albums and 28 albums in total on the Billboard Album chart. He has earned wide recognition as well as several awards including nine Grammy Awards, fourteen platinum albums, and fifteen gold albums.

Alpert is only the artist to hit No. 1 position on the U.S. Billboard Hot 100 pop charts as a vocalist as well as an instrumentalist. He sold over 72 million records around the globe. He was awarded an honorary doctorate from Berklee College of Music in 2000, awarded Society of Singers Lifetime Achievements Award by Society of Singers in 2009.

Furthermore, Herb was also awarded one of the 2012 National Medal of Arts award by formal President and Mrs. Obama in the White House’s East Room on 10th July 2013.

Herb married his high school sweetheart Sharon Mae Lubin after returning from the army in 1956. The couple welcomed two children named as Eden and Dore. Later in 1971 after fifteen years of marital relationship, the couple ended their relationship in divorce.

Afterward, he married to Lani Hall, a recording artist in 1973. The couple has a daughter named as Aria Alpert, an actress. The couple is living happily together and hasn’t apart till date. It seems they are having a healthy relationship as there is no any sign and rumors of divorce till date.

Herb earns a huge sum of money in his career. He is one of the greatest musicians in the world and has sold over 72 million records. He also owns a music publishing company named “Almo Sounds” which is also the biggest income generating sources.

Moreover, he also owns a few other music recording companies and has also invested in several other businesses. Despite earning, Herb Alpert also advocates for several charities and donations.

In 2010, Alpert Pacific sold his Palisades estate at $2.6 million. He also donated $24,000,000 to CalArts for its music curricula. Also, Alpert and his wife donated $30 million to the University of California, Los Angeles. In the year 1987, Alpert and his co-owner, Jerry Moss, sell A&M to PolyGram Records for $500 million.

Allocating information from several sources as of 2018 it is found out that the famous musician Herb Alpert’s current estimated net worth is around $900 million.