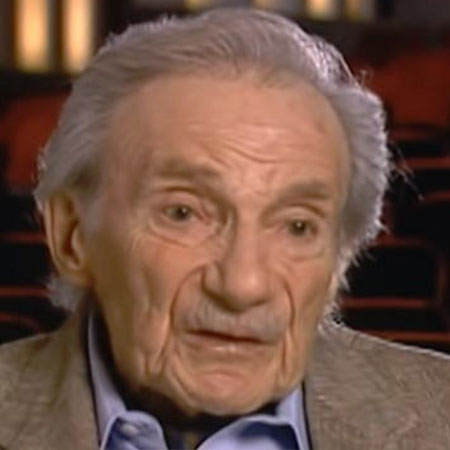 An American actor, Jonathan Harris well-known for portraying in the television series The Third Man and the science fiction series Lost in Space. Jonathan married to his girlfriend Gertrude Bregman in 1938.

Harris had appeared in more than 500 television series and movies and had also voiceovers in movies such as A Bug’s Life, Toy Story 2, etc. He died of a blood clot to the heart in 2002 at the age of 87.

Jonathan aka Jonathan Daniel Charasuchin was born on 6th November 1914 in The Bronx, New York. He was born in a poor family to father Sam Harris and mother Jennie Charasuchin who immigrants from Russian Jewish.

Jonathan attended James Monroe High School and completed his graduation in 1931 at the age of 16. Afterward, he enrolled at the Fordham University and pursued his bachelor’s degree in pharmacology in 1936. He also changed his name to “Harris” from “Charasuchin” before entering college despite his father disagree.

Harris was desperate to pursue a career in acting which made him prepare a fake resume and step in the entertainment industry. After struggling for several years, he finally landed in the Broadway play The Heart of a City portraying the character of a polish officer in 1942.

After making the first step, Jonathan got opportunities to feature in the different stage show and no longer after he also got chance to appeared in television series. He first made an appearance as a guest in The Chevrolet Tele-Theatre in 1949 and continued to feature in the led roles in the series such as The Web, The Twilight Zone, The Outlaws, Zorro, Bonanza, Lights Out, and much more.

Despite acting career, Harris had also done voice over for several films such as Rainbow Brite and the Star Stealer, Pinocchio and the Emperor of the Night, Happily Ever After, A Bug’s Life, Toy Story 2, Hubert’s Brain, The Bolt Who Screwed Christmas, and much more.

Due to a back problem, Jonathan was taken to the hospital just before two months of the reunion of the TV movies Lost in Space: The Journey Home. Later he died of a blood clot to the heart on 3rd November 2002 at the age of 87.

Jonathan married to his childhood sweetheart girlfriend Gertrude Bregman in 1938. The couple welcomed a child named as Richard born in 1942. The couple had a healthy relationship and during their marital relationship, there was no any sign and rumors of divorce.

The couple was together until death. After five years of the death of Jonathan, his wife, Gertrude, also died on 28th August 2007 due to natural causes at the age of 93.

Throughout his career, Jonathan had featured in more than 500 television series, movies, and also voiceovers in different movies. Allocating information from several sources as of now he had an estimated net worth of around $1.5 million.