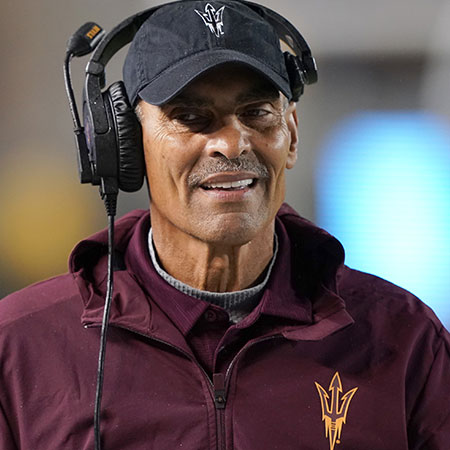 Herm Edwards is a famous name in American Football, who has been serving National Football League as a coach. Born on April 27, 1954, as a son of Master Sergeant Herman Edwards, Sr. and Martha, Edwards has also been serving ESPN as a pro football analyst since 2009. During his playing career of 10 seasons from 1977 to 1986 he played cornerback with the Philadelphia Eagles, Atlanta Falcons and Los Angeles Rams. Before starting his coaching career, he had gained name and fame as best player.

Born on an Army base in Eatontown, New Jersey, Edwards played started his playing career from collegiate level football in 1972. Edward’s father was African American World War II veteran and his mother was German. He attended SDSU and graduated with degree in criminal justice. During his playing career, Edward played nine seasons in Philadelphia Eagles and made a championship appearance in Super Bowl XV. Edward remained active in club for 135 consecutive games until being thrown out by new coach Buddy Ryan in 1996. After leaving Philadelphia, Edwards played for Los Angeles Rams and Atlanta Falcons for short period of time before announcing his retirement in 1996.

Edward started his coaching career in 1987 from San Jose State University where he served the team as a defensive backs coach. Later in he became NFL defensive coach and scout for the Kansas City chiefs. Edwards became head coach for the first time when he was hired by the New York Jets. Edwards was unable to give his best for New York Jets and team’s performance was not up to expectation during his tenure, so New York Jets replaced Edwards by Eric Mangini. In 2006, he started to serve as a head coach for Kansas City Chiefs. But Edward’s days were not in his favour in Chief as well. During his tenure, Kansas City Chief didn’t able to show any remarkable performance instead faced streak of losses. Win against Denver Broncos was one among very few win during Edward’s tenure in Chief. But a week after win against Bronocs, Chiefs was defeated by Carolina Panthers, the chief gained only 127 yards which was their worst performance in 22 years. Edwards retired from coach in January 23, 2009.
Edwards was famous for his motivational speak. Despite of lose he used to give motivation speech in press conference. He has published a book of his own quotes. Edwards is currently married with Lia Edwards and has two daughters and one son with her. Edwards is currently practicing Roman Catholic though he was born and raised Baptist. One interesting thing about Edwards is that he had not watched any game of Super Bowl before he started to serve as an analyst for ESPN. Edwards has committed not to watch the Super Bowl until he himself plays in one. During his career Edwards has earned net worth of $8 million. He stands tall with height of 6’0’’.