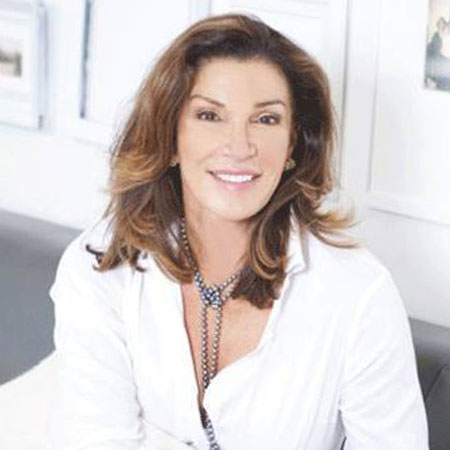 Hilary Farr is a Canadian as well as an international home designer. Moreover, Farr is also an actress and television host. Farr has designed and renovated properties in different countries including Australia, the United Kingdom, California etc. These days, Farr hosts the show Love It or List It.

Previously, Hillary Farr was married to Gordon Farr but the couple ended their relationship in divorce after few years of their marital relationship.

Hilary Farr was born on 31st August 1952, in Toronto, Canada. Although being such a famous actress, she hasn’t revealed any information about her parents and other family members. Farr spent her entire childhood in London, England.

Farr developed a deep interest in theater. Likewise, she was introduced to interior design after helping her mother to decorate her childhood home for the first time.

Since her early age, Hilary Farr developed a keen interest in theater and designing. So till the date, Farr has appeared in several movies as well as worked as a host in different shows.

In the beginning, she worked at part-time jobs, renovating homes. Furthermore, she also worked on various film and television show sets.

We love @Hilary_Farr‘s use of this print in a nursery—what do you guys think?! #design #decor pic.twitter.com/TrzSxsonok

Farr made small roles in the movies like Layout for 5 Models (1972), Sex Farm (1973), Feel the Width (1973), City on Fire (1979) etc. Furthermore, in 1973 she made a singing role in the movie Grease. Likewise, regarding her designing career, Farr has worked in the countries like Australia, the United Kingdom, New York etc.

Hilary Farr has renovated houses for the famous celebrities like Jenna Elfman and Jennifer Hudson. Moreover, Farr has worked as a host in different television shows. Since 2008, she is working as a regular co-host on the show Love It or List It along with David Visentin.

Did you know you can watch full episodes of #loveitorlistit on the @hgtvcanada website? Well, now you do! https://t.co/mScP76vlU1

Likewise, Farr has also served as a judge on W Network’s Search for the Next W Expert 2010. In 2014, she was a guest and design expert at Art Van Furniture convention held in Orland Park and Chicago, Illinois. Well, Farr is one of the regular members of the television series Brother Vs. Brother.

Hilary Farr is active in both acting as well as designing career. These days, she appears on the television series Brother Vs. Brother since 2013. Furthermore, Farr is also the regular co-host of the show Love It or List It since 2008.

The 65 years old, Hilary Farr is currently single. However, previously she was married to Gordon Farr. Gordon is a producer as well as a writer in the American film industry. The couple together has a son.

#FBF: Look how cute we were, @davidvisentin1! In Times Square #NYC – Our FIRST year of #LIOLI ON @HGTV US!

But this couple failed to continue their relationship. And after few years they got divorced. Well, after the divorce, Hilary Farr was rumored to be linked with a co-star from ‘Live it or List it’ David Visentin. But none of them confirmed it yet.

According to the recent data, Hilary Farr has the estimated net worth of $7 million. Farr earns a decent amount of money from her multiple professions. She has appeared in several movies as well as in the television shows.

Some colour for you, as the days get dark and grey.

Furthermore, as being one of the famous home designers, Farr has designed and renovated the properties in the countries like Australia, the United Kingdom, California, New York etc. Farr also owns designing showrooms in New York and Toronto from where she earns a good amount of money.