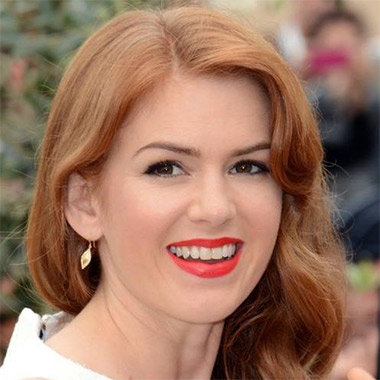 Isla Fisher is a beautiful actress. She began her career on Australian television. She is known for her comedic roles in Scooby-Doo, I Heart Huckabees, Wedding Crashers, Hot Rod, Definitely, Maybe, Confessions of a Shopaholic, Rango, Bachelorette, and Arrested Development.

She was born on 3 February 1976 in Muscat, Oman. Her birth name is Isla Lang Fisher. She was born to Scottish parents. Her parent’s names are Elspeth Reid and Brian Fisher. Her family moved to Perth, Western Australia when she was six years old. She has four brothers.

She studied at Methodist Ladies’ College and Swanbourne Primary School. While she was in school, she appeared as a lead role in a school production, Little Shop of Horrors. She attended L’Ecole Internationale de Theatre Jacques Lecoq in Paris when she was 21. While she was studying there she learned clown and mime and commedia dell’arte.

When she was nine years old, she appeared in commercials on Australian television. She also got a role in popular children’s television show Paradise Beach and Bay City. She published two teen novels i.e. Seduced by Fame and Bewitched, with the help of her mother. She was only 18 years old then. She then appeared playing in Home and Away in the role of Shannon Reed. She won the nomination of Logie Award for Most Popular Actress in 1996. She then attended L’Ecole Internationale de Theatre Jacques Lecoq after leaving the soap.

In 2001 she was cast in the German horror film Swimming Pool as Kim. In 2002 she appeared as Mary Jane in the film version of Scooby-Do. For her role in the film, she wore a blonde wig. She then played the character of Kristy in The Wannabes. She was awarded larger role alongside Owen Wilson and Vince Vaughn in Wedding Crashers. She won Breakthrough Performance Award at the MTV Movie Awards. On August 2, 2005, she was crowned the 1000th guest on show Race. In 2006 she played in the relationship drama London as Becca. She also has played in the romantic comedy Wedding Daze as Katie. She then appeared in a thriller film, The Lookout in 2007. She then with her co-stars Abigail Breslin, Elizabeth Banks, Ryan Reynolds and Rachel Weisz appeared in Definitely, Maybe.

She also did voice job in Horton Hears a Who!. She appeared playing the role of a college graduate working as a financial journalist in confessions of a Shopaholic. She also won the nomination for Teen Choice Award for the role. She then starred in the comedy Burke and Hare in 2010. She did voice job for the role of Beans in Rango. She also did voice work for the character Tooth in the animated film Rise of the Guardians. She then appeared with Leonardo DiCaprio in The Great Gatsby. She also played in the crime thriller film Now You See Me.

Isla Fisher got engaged to comedian Sacha Baron Cohen in 2004. They first met each other at a party in Sydney, Australia. On March 15, 2010, the couple got married in France. They are blessed with two daughters named Olive and Elula Lottie Miriam. They also have a son named Moses Brian. Currently, she resides in Los Angeles, California, United States.

Isla Fisher, who holds both British and Australian nationality has a net worth of $20 million dollars as of 2016.