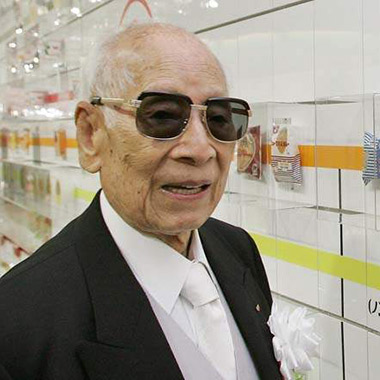 Businessman and inventor Momofuku Ando was born on March 5, 1910, in Kagi County, Japanese Taiwan (now called as Puzi, Chiayi County, Taiwan). He was a Taiwanese-Japanese businessman. He was mainly known as the founder of Nissin Food Products Co., Ltd. He is one of the inventors of instant noodles, Cup Noodles, and instant ramen.

His Japanese name was Go Pek-Hok. He was born into a wealthy Taiwanese family. After the death of his parents, he was raised within the city walls of Tainan Cho by his grandparents. His grandparents owned a small textiles store. When he was 22 years old, he started his own textiles company in Eirakucho, Daitotei, Taihoku City which is now called as Taipei.

In 1933 he also established a clothing company while traveling to Osaka with only 190000 while attending Ritsumeikan University studying economics there. He moved to Japan and became a Japanese citizen after World War II. He attended the Ritsumeikan University. He founded a small merchandising resistant in Osaka with the legacy from his family, at the same time. The Japanese reading of his Chinese name is Momofuku and his common Japanese surname is Ando. In 1948 he was convicted of tax evasion and was in jail for two years.

According to his biography, he had provided scholarships for students as a form of tax evasion. Due to a chain reaction bankruptcy, he lost his company. He then started a small family-run company producing salt. While Japan was still suffering from a scarcity of food in the post-war years, the Ministry of Health told people to eat bread made of wheat flour provided by the United States. He was confused, although the noodles were more familiar to the Japanese, why The Ministry was recommending to eat bread. According to The Ministry, the noodle companies were too small and insecure to satisfy supply needs. After that, he decided to develop the production of noodles by himself.

On August 25 158, he marketed the first packet of precooked instant noodles. He was 48 years old then. The chicken flavored noodles is called Chikin Ramen. It was considered as a luxury item with a price of ¥35. On September 18, 1971, he began selling his most famous product, Cup Noodle. It provides a waterproof polystyrene container. Instant ramen became a booming business. In 2009, worldwide demand reached 98 billion servings. He then founded the Instant Food Industry Association. He became the chairman of the International Ramen Manufacture’s Association. The Momofuku Ando Instant Ramen Musem is named after him. According to The Financial Times, his Cup Noodles helped spark the popularity of instant noodles overseas. He noticed that Americans enjoy noodles by breaking the noodles in half and putting them into a cup and pouring hot water. They used a fork instead of a chopstick.

On January 5, 2007, he died at the hospital in Ikeda, Osaka Prefecture because of heart failure. He died at the age of 96. He said that his long life was because of eating Chicken ramen and playing golf. His wife name is Masako. He has two sons and a daughter.