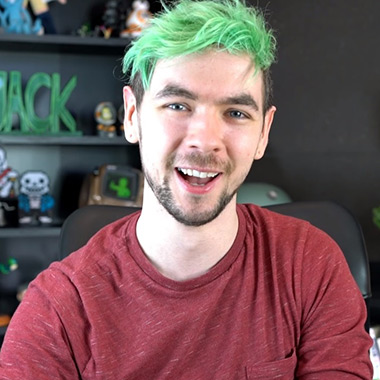 We have hundreds of such examples where one has achieved his/her goals with the help of the internet. Among the long list of such internet celebrity, Jack Septiceye is one of the popular names if you are gamers and love to play the latest and hit games. Sean William McLoughlin who is best known as Jack Septiceye is one of the kings of the internet blogging and youtube. He has a huge number of fans following in twitters whereas his followers on youtube can even beat the local musician who is craving their path to success.

Jack who was born in the year 1990, February 7 is an Irish You Tuber who is generally in height due to his video production which is totally based on games. The energetic and charismatic was born and raised in Athlone, Ireland.

He began his internet and youtube career in the year 2007 and by his talent and subscriber, he is regarded as one of the highest paid and biggest YouTuber of the Ireland.

Regarding his educational background, he attended two times college in Ireland, at the first he was quite serious about his career with the musical field but later he decided to take the degree in Hotel Management leaving the degree of Music Technology.

Coming back to his youtube career, he has magnificent subscriber of 7.5 million subscribers along with 3 billion views with 2025 videos. He even has 1000000 followers on twitter. If you have ever come across his videos then the first thing you need to do is put your volume in minimum 15 % level otherwise you will go deaf with his loud musical background. Along with his video credits, he has good networks and communication with the other famous gaming YouTuber such as Markiplier, PewDiePie, and Cinnamon Toastken.

He has the proven record of producing series of videos with series on games. His series generally came out in 3-5 days’ time and he makes the video of famous games like The Escapists, Subnautica, The Sims 4, GTA 5 and Happy Wheels.

Besides his gaming videos, he also does the Reading Your Comments video where he literally shows his skills to entertain the fellow watchers. Likewise, he is actively involved in vlogs too where he generally talks about his life history and daily routines along with progress in his channels and lives. With his lives in Youtube, he also falls under the category who has huge net worth just because of youtube.

“Top of the morning to you, laddies! My name is jacksepticeye, and welcome (back) to *game/video title”

Concerning about his personal life history and physical appearances, he usually keeps his beard and he has colored his hair into green while he keeps changing his hair color. The handsome and energetic persona has not been indulged in any kinds of relationship and there are no rumors as well. He might have a girlfriend as he is rich and famous however he has put this section very quiet and reserved.