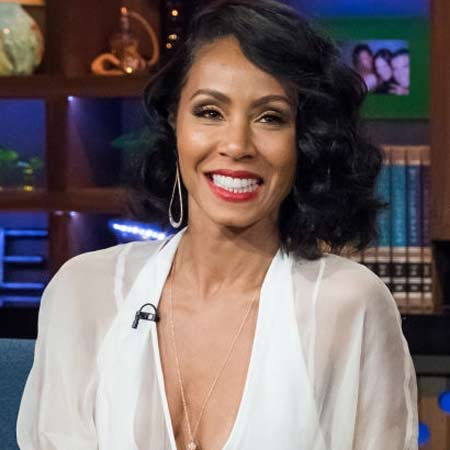 Jada Pinkett Smith is an American actress, songwriter, and dancer. The multitalented Smith, even run a business. She made the first break of her acting career in a daily sitcom A Different Role in 1991. Further, she has launched her music career as she created her own metal band named Wicked Wisdom. She was a singer and songwriter for the band.

Jada Pinkett Smith is married to a popular rapper and actor Will Smith. She is the stepmother of a popular American reality star, Trey Smith.

Jada Koren Pinkett Smith aka Jada Smith was born on 18 September 1971 in Maryland, US. She is a daughter of Nurse Adrienne Banfield Pinkett and a contractor Robsol Jr.

Smith attended Baltimore School of Arts as well as North Carolina School of Arts. Later she moved to Los Angeles where she stayed with her longtime family friend, Lavern Whitt.

When Smith was young her parents were divorced and her mother and grandmother raised her. That was the best time when her grandmother noticed her passion towards acting.

The talented actress started her acting career in 1990. Her first TV appearance was in the American comedy series True Colors which ran from 1990 to 1992.

In American thriller Menace II Society, she made her entrance in 1993. However, the film became a commercial success. The movie also achieved a critical reputation for its violent scenes, disrespectful language and for its drug-related content.

In several movies such as Woo, Set it off, Demon Knight, Scream 2, Return to Paradise, Smith featured with both lead and supporting roles.

After few years she became famous for her role in American Australian movie ‘The Matrix Reloaded‘ and its upshot ‘The Matrix Revolution‘. Both the films became commercially successful. Her another important work is in The Nutty Professor. The film became commercially hit and earned $274million worldwide. However, the movie was also able to win an Oscar Award for the category of best makeup.

In 2005 in an animated comedy film, she played the main role of Gloria, the hippopotamus in Madagascar.
In 2008, Smith made her directorial introduction after she directed the movie The Human Contract. She was the writer of film and performed in supporting role as well.

Moreover, Smith featured a lead role in an American medical drama series Hawthorne. Her role helped her to gain a nomination for the Prism Award and NAACP Image Award.

Currently, she was seen in the movie Bad Moms released in 2016 and Magic Mike XXL released in 2015.
Through her career, Pinkett Smith has won many important awards and nomination. She won Blockbuster Entertainment Award, Choice Movie Actress Action, Teen Choice Award and much more for her different roles.

Jada Pinkett Smith is married to well- known rapper and actor Will Smith. They met in 1994 and got married after three years. The couple was blessed with two children one son named Jaden Smith and a daughter Willow Smith.

Smith is known for her Philanthropy. Along with her husband she has established Will and Jada Smith Family Foundation which provides support to youth and families. They also offer some funds and services to other nonprofit organizations.

By the American Screenwriters Association, they were awarded as David Angel Humanitarian in 2006. Also, she has donated a million dollars to Baltimore School of Arts.

Jada Pinkett Smith is spending a luxurious life.  As per the online sources, her net worth is reported to be around $20million.

Moreover, Smith earns $150000 as per episode of Hawthrone.  Moreover, her husband, Will Smith one of the richest actor in Bollywood movies, net worth is also estimated to be around $250 million.