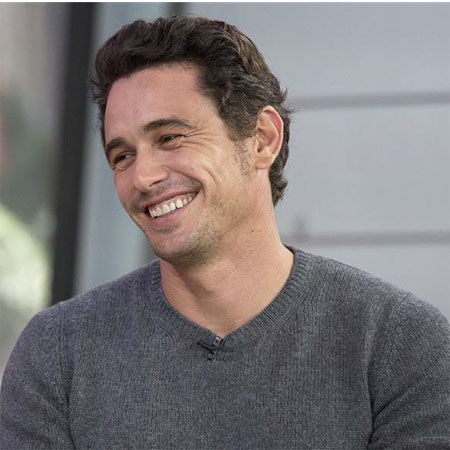 James Franco is an American actor, filmmaker, and college instructor, well-known for featuring in the movie Pineapple Express as Saul Silver. He was nominated for a Golden Globe Award and Stoner of the Year Award by Times magazines.

James was born as James Edward Franco on 19th April 1978 in Palo Alto, California. She was born to a father, Douglas Eugene, businessman, and mother, Betsy Lou, a writer and occasional actress, and grew up along with his siblings Dave and Tom Franco. Franco completed his high school graduation from Palo Alto High School in 1996. He went to pursue a bachelors degree in Arts majored in English from University of California, Los Angeles but dropped out after his first year. He also attended Columbia University’s MFA writing program, New York University’s Tisch School of the Arts for filmmaking.

James also attended Brooklyn College for fiction writing, the Low-residency MFA Program for Writers at North Carolina’s Warren Wilson College for poetry. Additionally, he also received his MFA from Columbia and attended the Rhode Island School of Design. Currently, he is a Ph.D. student in English at Yale University.

After several months of training, Franco got his first paid role from a tv commercial for Pizza Hut. Later, he got a chance to appeared in a guest role on the tv series and sooner cast in a leading role on the NBC tv series Freaks and Geeks.

He also got an opportunities to feature in tv biographical movie James Dean which earned him a Golden Globe Award and nominations for an Emmy Award and a Screen Actors Guild Award. Franco won the heart of millions of people by his outstanding acting skills. He also featured in other hit movies such as Interview, 127 Hours, About Cherry, The Is the End, Pineapple Express, Maladies, Rise of the Planet of the Apes, and much more.

Additionally, he also featured in several tv series such as The Deuce, Deadbeat, Saturday Night Live, Hollywood Heights, General Hospital, The X-Files, and several others.

Despite acting, James also directed and produced the show Saturday Night of an episode of SNL. He also hosted the 83rd Academy Awards along with Anne Hathaway and served as a lecturer at the University of California, Los Angeles in the School of Theater, Film, and Television. Currently, he is working on his upcoming movies such as Arctic Justice: Thunder Squad, Kin and Future World which will be releasing in 2018.

James Franco is a successful actor and won the heart of millions of people by his outstanding acting skills. He dated Marla Sokoloff from 1999 to 2002, Ashley Hartman from 2004 to 2005, Sienna Miller in 2006, Ahna O’Reilly from 2006 to 2011, Agyness Deyn, Amanda Seyfried, Emilia Clarke, Lana Del Rey, Erin Johnson, etc.

Though James dated several model and actress, he didn’t found anyone with whom he can be with for rest of his life happily. James hasn’t married yet either welcomed any children yet. He is currently single and focusing much on his career rather than love affairs and relationship.

James was once rumored to be a gay. He became a subject of discussion in several media and restlessly questioning if he is a gay. In an interview with Four Two Nine magazine, he opened up about his sexuality and state that it is not who you have sex with that defines your sexuality. Moreover, he also added, “Well, I like to think that I’m gay in my art and straight in my life.

Recently, James has also been through controversy with 17-years-Old Girl, Lucy Clode. She leaked the conversation between her and James Franco on the internet which appeared as if James propositioned her to meet up at a hotel. Later, he admitted that he did try to pick up a Scottish schoolgirl. He also shared on Twitter that I’M NOT! HOPE PARENTS KEEP THEIR TEENS AWAY FROM ME. Thank you.

James Franco earns a huge sum of money in his career. He featured in several hit movies through which he earned wide recognition as well as a huge sum of wealth. His several movies earned millions of dollar in worldwide box office collection. He makes around $4.5 million annually featuring in several tv series.

Franco lives in a has $3.3 Duplex in L.A.’s Silver Lake which he purchased from costume designer Janie Bryant. He drives several cars including his favorite BMW i3 and Audi Q3 which cost around $85,000.

Beside all, James also owns a production company Rabbit Bandini Production through which he earned around $7 million. As per 2017, it is estimated that his current net worth is around $30 million.