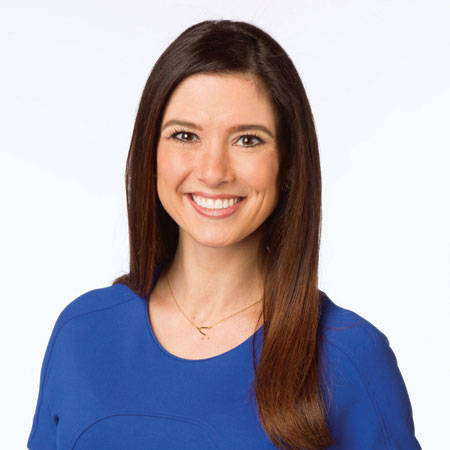 Jen Lada is an American well-known journalist, who is well known for working as a contributor for digital platforms and College GameDay for ESPN. Additionally, she is also a contributor of Sportscenter, Mike and Mike, Baseball Tonight, and many such shows. She is a happily married woman and living a blissful life with her husband.

Jen Lada was born on 14th January 1981 in Spring Grove, Chicago. She grew up in the nearby county of Spring Grove, with her parents and 3 other siblings. She has also said that after growing up witnessing difficult divorces amongst her friends’ families, that she is very grateful for “normal”

During her elementary school, she wanted to be a doctor or a lawyer. Her parents were always very good about complimenting their talents, and she was sure at some point they had conveyed the prestige associated with those professions.

Like all kids, she wanted to make them proud. As she got older, she enjoyed reading, writing and presenting and it became more obvious that she would enjoy and excel in a role.

Jen Lada spent most of her childhood days in Chicago area. Lada attended Marian Central Catholic High School, where she was well known for being a standout on the school’s cross-country and track teams.

It was her sporting talent that helped her to secure a partial scholarship to Marquette University, where she eventually graduated with a degree in broadcast journalism.

Jen Lada began her journalism career during her university years, where she worked on their local paper and was also affiliated with a sorority house.After completing her graduation from University, Lada served as a reporter and anchor for WITI-TV in Milwaukee and WREX-TV in Rockford, Ill. At WITI, she earned the Best Sportscast 1st Place honor in 2011 from the Wisconsin Broadcasters Association.Although she was a general reporter, she became identified for her love of the sport.

In addition, her story about a Milwaukee woman who ran across the United States to establish awareness for Multiple Sclerosis was nominated Best Feature 1st Place by the Milwaukee Press Club.,

Then, Lada became an anchor and reporter for two and a half years in the Chicago area for Comcast SportsNet. During her time at CSN Chicago, she was the reporter on the Bears and White Sox pro sports beats.  She also anchored SportsNet Central and was the host of High School Lights, White Sox pre- and postgame shows, and the trivia show Beer Money.

Jen Lada became a part of ESPN in July 2015. Lada is the contributor to ESPN’s digital platforms and to ESPN’s College GameDay. She has covered important stories for the network, containing two Auburn-LSU families coming together through tragedy and a story about former Connecticut quarterback Casey Cochran who suffered 13 concussions while playing football.

Have a look her Sassy Photos on the Hitsberry Video: Youtube

Jen Lada assaulted by an Interviewer

During her first interview, the interviewer did some disgracing things such as taking his pants off. He not only did that but also drank way too much and forced her to his house instead of taking her to her hotel. He also asked her to swim him.

Even though Lada notified about the whole event to the news director, no any response was taken and the sports director still works there.

Lada is a happily married woman. In an interview with Milwaukee Sports, she has admitted that she is married and that her husband coaches soccer. Jen also has a son with her husband whose name is not known. Jen is found of her son going to the baseball games and she has posted many pictures of them together on her Instagram. However, no pictures of her husband can be found.

Away from work, Lada is an endurance athlete, cyclist, and runner. She has run the Chicago Marathon three times and completed dozens of triathlons.

Jen’s net worth must have been boosted from her noble salary in ESPN.She is considered to be well paid from ESPN Channel and her net worth is estimated to be around $5 million. She received such a huge amount by serving as a sports anchor for such various channels.