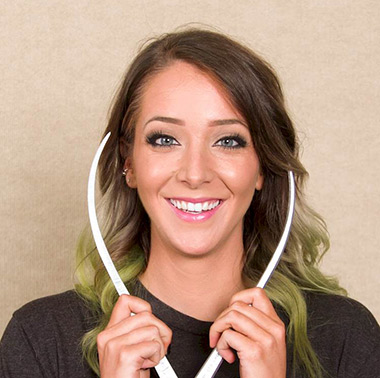 The beautiful, diversely talented, and internet sensation,  Jenna Marbles is an American YouTuber, vlogger, comedian, and actress. Her Youtube channel is the seventh most subscribed channel run by a woman and as of September 2016, she has more than 16 million subscribers.

She was born Jenna Nicole Mourey on 15 September 1986 in Rochester, New York, US. Her mother’s name is Deborah Mourey, which Marbles often mentioned in her videos. Her father is unknown and has an elder brother named  Devon Mourey.  Raised in Rochester she attended Brighton High School and graduated in the year 2004. She then went to Boston to Psychology at Suffolk University and graduated with a Bachelors Degree. Jenna went on to get her Masters Degree at Boston University, where she majored in Education in  Sports Psychology and Counseling.

FROM BARTENDER TO INTERNET SENSATION

Jenna Marbles’ previous career started with a popular satirical sports and men’s lifestyle blog called Barstool Sports and worked as its female segment site StoolLaLa. In the mid-2010, she shared an apartment in Cambridge, Massachusetts, where she had to pay $800 by working odd jobs such as bartending, tanning salon, dancing at night clubs, and blogging.

It was around this time Jenna released her video ‘“>How To Trick People Into Thinking You’re Good Looking‘ on YouTube. In a short span of time, the video went viral and has over 5.3 million views just in its first week. Since then, she started uploading comedic videos and in August 2011, her video ‘How To Avoid Talking To People You Don’t Want To Talk To’ was featured in ABC News and The New York Times. As of September 2016, this video has been viewed over 36 million times.

On every Thursday or Wednesday, she uploads new videos to her YouTube channel. She also was seen in Epic Rap Battles of History 13 episode Adam vs. Eve in season 2. In the episode of Annoying Orange Fake n Bacon, she played a fake banana. She also played Miley Cyrus in a Wrecking Ball for YouTube Rewind. She also appeared in Ridiculousness’s fourth season on 30 January. Jenna introduced Kermie Worm & Mr. Marbles which is a brand of dog toys; it is based on her real dogs. She has millions of fans on her social networking sites like Facebook, Twitter, Instagram, Tumblr, and so on.

Her last name ‘Marbles’ came from her dog Mr. Marbles after her mother Deborah complaint about her name appearing every time she searched the family legal surname on Google. According to her public profile, Jenna Marbles is not yet married and currently single. She previously was in a relationship with her longtime boyfriend Max Weisz, with whom she moved to Santa Monica in 2011. They broke up in early December 2012 but she revealed the news on 20 December. She also further commented about her reaction that she had a tough time after breaking up with Max. Later, She dated Julien Solomita in February of 2013.

Jenna Marbles’ net worth is estimated to be over $500 thousand with a handsome amount of salary from a different source. Her zodiac sign is Virgo and stands 5 feet and 5 inches tall. She has a cat named Nyan and her dirty movies are all animated. There was news that she is afraid of toilets. She formerly worked at Day Spa cleaning up wax and fingernails. She has many hot bikini photos which can be found easily on the internet.