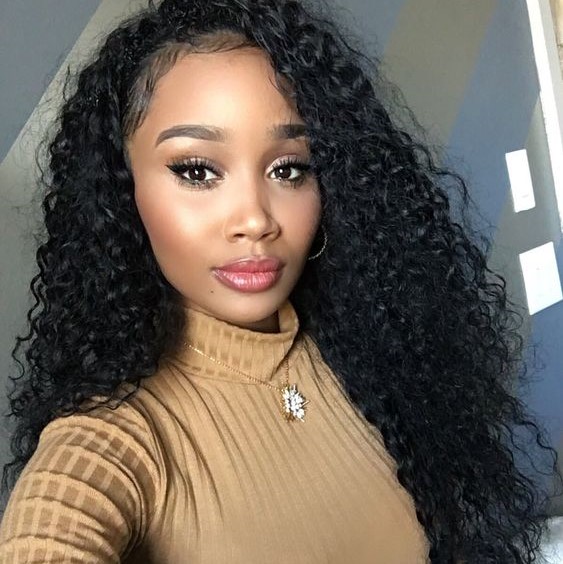 Jerrika Karlae is an American model and swimwear designer. She is well known as the fiancée of Atlanta rapper ‘Young Thug‘. She has also featured in her fiancee’s music video “Worth It.”

Jerrika came to media attention after she started dating, Young Thug Atlanta, a rapper who was given the birth name of Jeffrey Williams

Jerrika Karlae was born on 18th September 1993, in the United States.Her mother worked at Gucci Mane’s studio, where she used to manage Young Dolph. She explained that her mom went in for a simple liposuction method, but due to the unsterile material used during the surgery, she caught a near-fatal infection.

After observing her mother’s scary situation, Jerrika informs viewers that it’s very necessary that they fully examine and research the doctors they are sensing. She then exposes that she’s thought of starting operations to tell young girls her mother’s story as a warning about the hazards of cosmetic surgery.

Jerrika Karlae started her swimwear line doing her own sketches. She was inspired by Keva J, young African-American women, who started her own successful line.

She took her first sketch to a friend who could sew, and she made her first sample. Her first launch definitely wasn’t her ultimate goal as to where she wants to be as a designer, but it was definitely an amazing accomplishment as her first project as an entrepreneur.

Jerrika Karlae launched her cosmetics line in January 2016. She has always been a glamor girl, she always did her own makeup, and that’s kind of how she gained a lot of her following. A lot of girls started emailing her asking for makeup advice and for what kind of makeup they used.

She started thinking that she wanted to make something that could reach all women, that could cater to women of every color because there’s not a lot of products that do that.

Jerrika came to media attention when she began to date, Young Thug Atlanta, a rapper who was given the birth name of Jeffrey Williams and gained notoriety in 2013 following the release of his mixtape 1017 Thug. The couple first met first around 2014 at Gucci Mane’s studio. She was there with her mother.

Jerrika Karlae explained in an interview with The FADER, saying,” she was looking a kind of cute, but she was not there looking for love. So, when Thug approached her that first time she sort of shrugged it off. “I was like, you’re a rapper, and I already know what’s that about.”

The two soon became friends, but it wasn’t until Thug began to show interest in her swimsuit and makeup businesses that Jerrika saw the potential for something more.

After few months later they engaged in April of 2015. In 2015, their breakup news began to buzz when they sat down at VladTV, and Jerrika Karlae announced on Instagram that she is now single.

“Everything he said was perfect,” Jerrika told VladTV. “He completely swept me off of my feet. That’s what people don’t know. He’s a charmer. Especially with women. He will sweep you off of your feet with his words…Ever since the first day we met, it’s been crazy ever since. As far as just the media, the comments—I mean, we’re both young, so we go through things, of course. I say ‘crazy’ because we’ve always had this mentality as we belong to each other…In the beginning, it was a power struggle.”

But before Young Thug came around, Jerrika revealed she was in a relationship with an unnamed NBA player. No information on when Jerrika and Thugga will decide to jump the broom, but we guess it’ll be in the far future.jerrikajerrika

On 16 July 2017, she became a sensational media personality due to her hair color, where she has posted her seductive pictures in the different pose.

Jerrika Karlae has a huge fan following on social sites like Facebook, Instagram. She has a substantial following on Twitter with more than 80,000 followers. She is one of the rising business women and model. Karlae has featured her fiancee’s music video ” “Worth It.”

Have a look her video:

On the other hand, her fiance’s net worth has $6 million. Jerrika Karlae is surely living a luxurious life with him.