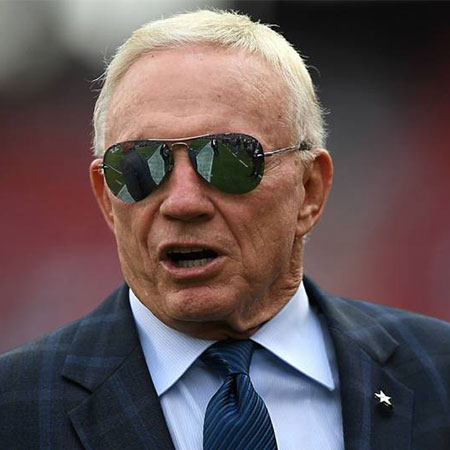 Jerry Jones is an American business tycoon who currently Dallas Cowboys of the National Football League since 1989. He is a former college football player and also served as the co-captain of the 1964 Arkansas Razorbacks National Championship football team.

Jones is married to his wife Eugenia since 1963 and three children. He has an estimated net worth of $7 billion in 2019.

How much is Jerry Jones Salary and Net worth?

Also the member of Billionaires’ club, Jerry Jones has an estimated net worth of $7 billion in 2019. Back in 2018, The Cowboys owner reportedly had a net worth of $5.6 billion. By March 2014, his net worth was around $4 million.

Jones purchased Cowboys for $140 million in 1989 and his team is now worth $5 billion in 2019. Jone reportedly earns about $350 million annually from his team.

Initially, Jerry Jones worked as a vice president on his dad’s insurance company and also made some investment in a pizza restaurant. However, his business failed so, he borrowed money from his friends and started oil and gas fields business which made him a billion dollar person.

Jones has been able to maintain standard life with his huge net worth. He lives in a luxurious villa in the Highland Park area of Dallas which is worth around $20 million as reported. Besides, he owns several other houses and condos as reported. Jones also has a huge collection of cars.

He holds an American nationality and his zodiac sign is Libra

In 1945, his family relocated to North Little Rock, Arkansas where he attended the North Little Rock High School where he played football as a running back and graduated in 1960. After his graduation, his family moved to Springfield, Missouri where his father started working for Modern Security Life Insurance Co. as a president.

The company gathered a huge profit. His father later sold the company where he briefly served as a vice president.

Jones got a scholarship from the University of Arkansas and was soon included in the university football team. He also served as the co-captain of the 1964 National Championship football team where he was included as an offensive lineman by Hall of Fame coach Frank Broyles and was the teammate of Jimmy Johnson.

Jones graduated from the college in 1965 and took some money to open a restaurant in Missouri. At the same time, he was offered to buy Chargers for $5.8 million in 1966, however, due to the disapproval of his father he had to skip the plan.

After his graduation with a Masters degree, Jones failed in several business ventures and began an oil and gas exploration business in Arkansas.

Besides, Jones also has made several TV appearances. He was also featured in an episode of the TV show Coach in 1999 and also starred in a 2007 television commercial for Diet Pepsi MAX.

Some of the other movies and TV series, he has appeared in are 1998 made-for-television reunion movie Dallas: War of the Ewings, 1998 film BASEketball, the seventh season of the HBO series Entourage in 2010, the first episode, “Go Fund Yourself” etc.

The Dallas Cowboys’ owner is married to his wife Eugenia Jones since 1963. Jerry and Eugenia both attended the University of Arkansas and first met each other on a blind date.

His wife Eugenia is a former Miss Arkansas USA, currently serves as the associate of the BOD for AT&T

The couple is blessed with three children named Stephen, Charlotte, and Jerry Jr.

Their first child Stephen was born on the 21st day of June 1964 and currently serves as Dallas Cowboys’ chief functional executive vice director of the player personnel.

Second child; a daughter Charlotte, was born on the 26th day of July 1966. She is also on the Cowboys’ personnel team where she is currently working as the administrative vice president and the chief brand officer.

Their third child Jerry Jr. born on the 27th day of September 1969 is also involved with the Cowboys team where he combines the duties of the chief sales officer and marketing officer.