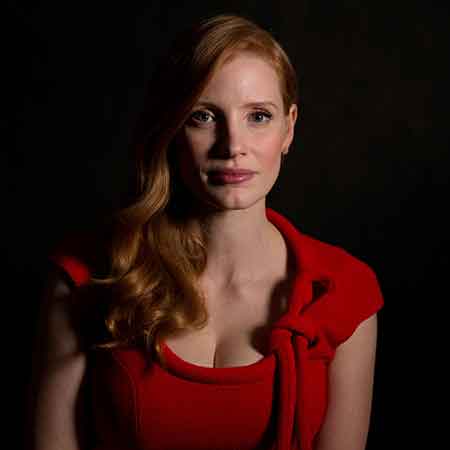 An American actress, producer, Jessica Michelle Chastain is well known for acting in movies like The Help, The Tree of Life and many others. The actress usually embarks upon films with strong female lead. Chastain is a two time Academy Award nominee. She has also been honored with a Golden Globe. Chastain was named the 100th Most Influential people in the world in 2012.

Jessica Chastain was born on March 24, 1977, in Sacramento, California. Her parents are Jerri Renee Hasley and rock musician, Michael Monasterio. She is of American nationality and she is of mixed (French, Dutch, English, Scots-Irish/Northern Irish, Scottish, Welsh, Irish, Basque, Castilian/Spanish, Greek, English, and German) ethnicity.

The actress grew up with her mother and stepfather, Michael Hasley. She has two sisters and a brother. Her sister Juliet committed suicide in 2003 after years of drug abuse. Chastain was estranged from her father Monasterio. It was Hasley who made her feel secure.

As for her education, Chastain attended El Camino Fundamenta HighSchool. She then joined Sacramento City College for her further education. Chastain only studied there for a year from 1996 till 1997. Later, she graduated with a Bachelors degree in Fine Arts from Juilliard School in New York.

The actress made her debut with the Tv series, Dark Shadows. She appeared in other various series like Veronica Mars, Close to Home and Law &Order: Trial by Jury. She later played the role of Anya in Williamstown Theatre Festival production of Anton Chekhov’s play The Cherry Orchard alongside Michelle Williams.

Chastain made her film debut with Jolene in 2008. She went on to star in movies like Take Shelter, The Tree of Life. The actress then appeared in the movie The Help in 2011 with co-stars Viola Davis, Octavia Spencer, and Emma Stone.

Chastain then lent her voice to the character Gia Jaguar for the movie Madagascar 3: Europe’s Most Wanted and its sequel. She starred in the crime drama, Lawless. In 2012, she portrayed the role of Maya in the movie, Zero Dark Thirty.

The actress then appeared in movies like Mama, Miss Julie among others. She also produced and starred in the movie, The Disappearance of Eleanor Rigby. The actress later starred in Interstellar co-starring with Matthew McConaughey and Anna Hathaway. Chastain went on to star in movies like The Martian, The Hunstman: Winter’s War. By then, she became known for doing feminist roles in the film industry.

The actress is now set to appear in X-Men film series in the installment Dark Phoenix. After that, she will appear in the sequel of It, George and Tammy and Painkiller Jane.

The actress has achieved numerous accolades. Some of them are.

Chastain is married to wife, Gian Luca Passi de Preposulo. The couple tied the knot on June 10, 2017, in a lavish ceremony held in the northern Italian city of Treviso, near Venice. Her husband is an Italian count of the Passi de Preposulo noble family and executive for the fashion brand Moncler. The two began dating back in 2012, The two took their time with the relationship, eventually taking it to the next level. They are now happily married.

Prior to this, the actress was rumored to be dating Tom Hiddleston in 2013. She was also in a long-term relationship with writer-director, Ned Benson until 2012.

Chastain likes to keep her personal life relatively private. She does not usually walk the red carpet with her partners. The actress considers herself to be a shy person. She is leading a happy married life with Preposulo. There have been no rumors of their extramarital affairs so far.

The actress has earned a huge sum of money thanks to her successful acting career. She has appeared in high grossing movies like Interstellar and The Martian. Both the movies grossed over $660 million. The Help also earned $216 million at the box office. Chastain must have earned a good amount from those movies. Moreover, she has an estimated net worth of $20 million.

With the rise in popularity, Chastain’s salary must have increased throughout the years. Her brilliant acting performances and a strong stance in women empowerment have inspired many people.

The actress lives a lavish lifestyle. She owns a $5.1 million apartment in New York City. It is spread in an area of 3,300 square foot. The apartment features a fireplace and tub in the master suite.

Apart from that, Chastain owns an Audi A7 which is priced at $90,000. her car collection also includes a Subaru Outback which costs around $49,140. She also has a Mercedes S Class which has a market value of $122,750.

The actress is still active in her career. With more exciting projects coming up, Chastain is sure to capture many hearts in coming days.