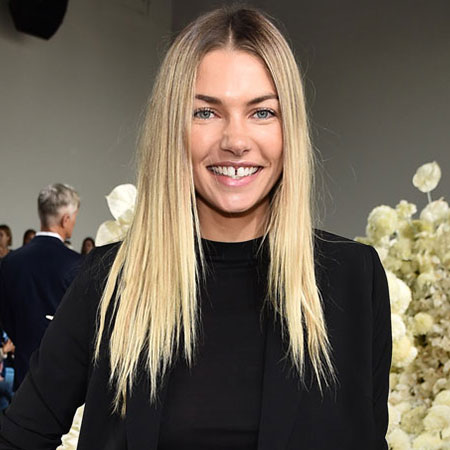 One of the richest and branded models Jessica Hart was born in 26th March 1986, in Sydney, Australia. Talking about her childhood dream, her life’s aim was to become police-women or a car-driver or a taxi driver.  Her life’s dream was related to holding weapon or to driving. She is Food person. She is from Australia where she got her life changing opportunity at a local shopping centre in Melbourne. She was only 15 when she was noticed on the cover of Australian Vogue. Some say her Aunt encouraged entering in a modeling competition in 2000 hosted by Dolly Magazine where she won the competition. She is well known as a gap-tooth smile. Talking about her family she has her mother named Rae and a sister named Ashley Hart. Appearing on the cover of 2009 Sports Illustrated Swimsuit Issue has raise the height of recognition of Jessica Hart.

Jessica Hart pursue her career by travelling to city of lights or city of dreams i.e. New York City. Her Gap Tooth has been signature look of Hart after she appeared in Victoria’s Secret catalog in 2009. Hart was also seen in the few episodes of show named The CITY. During her time a MTV’s. She is shown to be dating Nicolos Potts who is band member of Tamarama. She is also spotted in the Tamarama music videos such as “Middle of a Magazine” and “Everything to me”.  Jessica walked in shows for Julien Macdonald, Gottex swimwear, Matthew Williamson and many others. Jessica became the face of new Scotch and Soda line Été Blanc in early 2012. It is said that she had minor accidents in 2012, breaking her ankle and cutting her foot on glass at wedding. It seem it has been rough for Jessica in 2012 leading to separate incidents also causing nerve damage in her foot.

In 2012 and 2013, Jessica Hart walked in the annual Victoria’s Secret Fashion Show where she was caught speaking ill of Taylor swift. Later Swift demanded not to include Hart in 2014 Show. After that Jessica was seen appearing in the cover of Australian Vogue once again. Jessica Hart is one of the richest top models having net worth of $8 Million Dollars. She has appeared in several magazines and she has been modeled for ESpirit, Triiumph and Guess. She seems to be multitalented as she has passion for acting as well. She has also featured in ads for GAP, Guess, H&M , L’Oreal and many others.

Keeping in mind of Jessica’s Personal life, Jessica Hart had a long- term relationship with her boyfriend and her Australian fellow named Nicolas Potts. The subject about purchasing a $1 million dollar bedroom in 2008 had been through multiple controversies. Her relationship with Nicolos ended unfortunately in2010. After moving on with Nicolos she later dated a Greek billionaire, Stavros Niarchos III. 29 years old, Jessica Hart has been one of successful models in history of modeling.