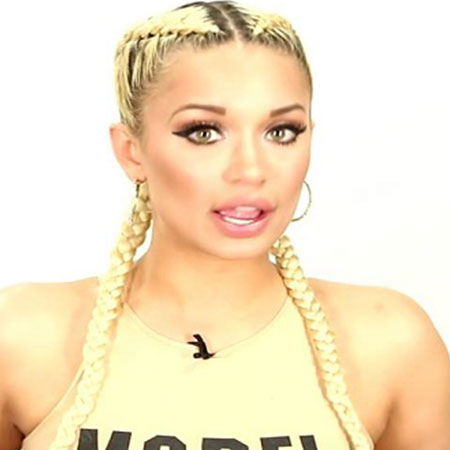 Jessica Kylie is an American entrepreneur, designer, model, and actress. She is well known as an international cover, fashion, as well as swimwear model. Moreover, Kylie is famous for appearing on the Latin television station, Mun 2 and MTV 2 as a Wild ‘N Out girl.

Jessica Kylie Zepeda was born on 30th April 1987 in Houston, Texas. She is a half white and half Mexican. Growing up as a typical Houston girl, Jessica Kylie got into the occasional fights. In high school, Kylie was a crazy gangsta girl.

Since her childhood, Jessica Kylie was offered modeling opportunities but never cared to take them seriously. She started her career doing odd jobs. The way Jessica Kylie decided to join modeling career was because she was getting offers left and right and her son’s father went to jail when he was only one month old.

Jessica Kylie began her modeling career by doing car shows and small video shoots. Soon, she selected for a calendar shoot. Unfortunately, the calendar never came out. But, Dwyane Darden, a photographer took some pictures of her and sent to a magazine.

A week later, Jessica Kylie selected with other 20 girls for a cover shoot of Smooth Magazine. Then, she was offered a second cover shoot in New York. Dwyane later became her manager, and her career took off from there pretty quick.

On the page of Smooth Magazine: Amazon.com

Jessica Kylie is the co-cover model for the 2008 Summerbunnies.com calendar. Moreover, she has featured in several magazines including

On the cover page of Pressure

Kylie also worked as a swimwear model for Kandi Kinis and is also a swimwear designer. Additionally, she also worked as a host at various club events. Apart from that, she worked with some rappers on their music videos, such as DJ Khaled, Lil Wayne, Big Sean, Enrique Iglesias, Pitbull, Slim Thug, and Gucci Mane.

Jessica Kylie is unmarried till date, but in the past, she was in a relationship with her college sweetheart. After dating a year, they welcomed their son. Jessica Kylie’s boyfriend was wealthy and took a good care of them. However, their relationship ended after he was sent to jail. Since then, she is taking care of her son by herself.

Besides that, Jessica is famous as Miss Rabbit within her friends and fellows. She loves to gossip and hang out with her love and dear ones.

Jessica appeared on the Latin television station Mun 2 and Wild ‘N Out girl on MTV. Moreover, she has also been the cover of magazines such as Quest Magazine, Juice, Urban Ink, Regime, Pressure and much more.

This made people suspect that her net worth is in a million. But sadly, Jessica Kylie’s net worth is still under the radar. Moreover, information regarding her house, cars collection, total earnings, income, and expensive gadgets are yet to be disclosed.