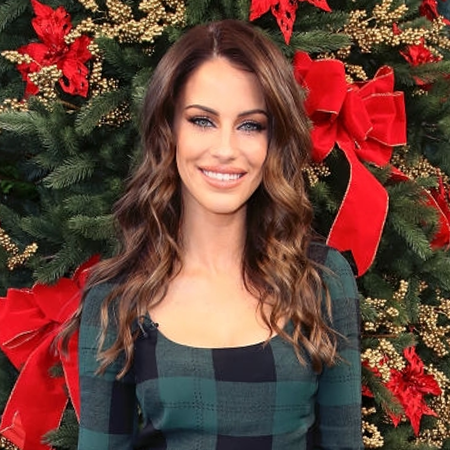 Jessica Lowndes is a Canadian singer, actress, and songwriter. She is well known for playing the role of Adrianna Tate-Duncan in The CW teen drama series 90210. Similarly, she is famous for her songs like Break, Never Lonely, Fly Away and Goodbye.

Currently, Jessica Lowndes is dating a 60-year-old man Jon Lovitz. The two are dating since 2015.

Jessica Suzanne Lowndes was born on 8th November 1988 in Vancouver, British Columbia, Canada. She is the daughter of Dan Lowndes and Suzanne Lowndes, a piano teacher. She was interested in singing and dancing from her childhood, and she began to play piano at the age of 10.

Jessica went to a private school, Pacific Academy. Later, Jessica Lowndes joined the field of acting when she was in high school.

Jessica Lowndes made her acting debut in 2005, playing the role of Peggy in the series, Masters of Horror. After a recurring role on Greek and Pretty Handsome, Lowndes made her theatrical film debut in the 2008 horror film The Haunting of Molly Hartley, where she played the role of Laurel Miller.

Lowndes soon moved to Los Angeles, and her acting career took off. From 2008-2013, she did the recurring role of Adrianna Tate-Duncan in the series 90210. In the show, she even made her musical debut and also provided her own vocals for all of the songs.

In the pilot episode of 90210, she sang the song Mama Who Bore Me. She also produced several of the tracks on 90210 such as Haven’t Been Drinking and Stamp Of Love. On March 2009, Jessica Lowndes released the song Flyaway, where she also worked as a writer-singer and guitarist.

In 2010, Jessica collaborated with DJ Ironik and featured on his single Falling in Love. In 2011, Buddy TV listed her as the #58 sexiest women. Likewise, Jessica premiered her single Silicone in Stereo on Youtube and Vevo and was on number 35 on Billboard Canada’s Top 50.

Jessica Lowndes’s other films and TV series include The Prince, A Deadly Adoption, and A December Bride, Altitude, Magical Christmas Ornaments and many more.

In the past, Jessica Lowndes was linked with various names. Firstly, her name was linked to Jake Gyllenhaal. She then connected with Danny Cipriani and Kevin Navayne.

In 2008, she dated to actor Adam Gregory but after dating around seven months, they parted in March 2009. At the same year, Jessica and famous actor Aaron Paul dated but their relationship also didn’t last long and broke up in 2010.

Likewise, Lowndes dated the Olympic winner skier, Jeremy Bloom in 2012. After spending four years together they parted. Currently, Jessica Lowndes is dating a 60-year-old man Jon Lovitz. The two are dating since 2015.

Throughout her career, Jessica Lowndes got a nomination for Canadian Screen Award and also nominated for Prism Award for her Performance in Drama Multi-Episode Storyline. She earned her attractive income from her career as an actress and singer.

Jessica Lowndes’s an annual salary has $540 thousand, and her net worth is estimated to be around $3 million which seems to increase in her near future.