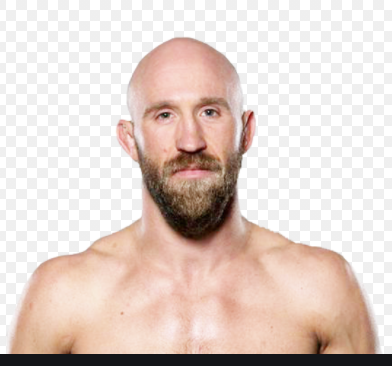 Joshua Burkman is an American professional mixed martial artist who currently competes in the Ultimate Fighting Championship’s Welterweight Division. Previously, he competed in the World Series of Fighting as well as The Ultimate Fighter 2.

Joshua Burkman is a married man. He got married to wife, Brandy Lyn Winfield with whom he shares two children, Legend Burkman and Atlas. Previously, he was in the relationship with a then-girlfriend, Arianny Celeste who is an American model. The couple dated each other for a certain period of time and separated.

Joshua Ray Burkman was born on 10th April 1980, in Salt Lake City, Utah to American parents where he attended the Cottonwood High School. At Cottonwood, he was a three-sport star athlete including, Class 5A All-State third baseman on the baseball team and captain of the football.

Afterward, Burkman joined Snow College where he played two seasons of college football. Apart from that, he also started like mixed martial arts. Burkman would pursue his professional career in football.

However, he could not continue it further due to an injury. He then dropped football and pursue mixed martial arts.

Joshua Burkman had his first debut fight at The Ultimate Fighter 2 Finale where he defeated Sammy Morgan by Knockouts in the 21 seconds of the first round. Besides, he fought with several mixed martial artists including Drew Fickett, Josh Never, and Forrest Petz.

However, he was unsuccessful against the bigger names. After three back to back losses, Burkman left the UFC with a record of 5 wins and 5 losses.

Afterward, Joshua Burkman joined Showdown Fights and World Series of Fighting subsequently. After fighting there for several years, he then returned to Ultimate Fighting Championship. More recently, he faced Alex Morono in the welterweight division. However, he lost the fight via a guillotine choke in the first round.

The 37 years old mixed martial artist, Joshua Burkman is married to his beautiful wife, Brandy Lyn Winfield since 2010. The husband and wife are blessed with two sons, Legend Burkman, and Atlas born in 2012 and 2015 respectively.

Prior to Winfield, Burkman was in the relationship with an American model, Arianny Celeste. The duo dated each other for a certain period of time and split due to some personal conflicts. At present, he seems to be concentrating on his professional career and family. Likewise, he has kept himself far away from the extramarital affairs.

Burkman and his wife have been living together for almost eight years now and still, they share a happy life with no rumors of any divorce.

Joshua Burkman makes a decent amount of net worth from his mixed martial arts professions. As of now, he has fought with many fighters and has the set the record of 28 wins out of 48 games.