An American television news reporter and anchor for the Fox News Channel, Julie Banderas, well-known for serving as an anchor for America’s News Headquarters on Saturdays and Fox Report Weekend. Having active in this field since 1997, she has contributed for the channel such as WLVI-TV, WHSV-TV, WFSB-TV, WBRE-TV, and WNYW. Life as her professional life her personal life is also successful i.e she is a happily married woman and mother of three children.

Born as Julie E. Bidwell was born on September 25, 1973, in Hartford, Connecticut, USA. She is the daughter of Fabiola and Howard D. Bidwell. She was raised up by her parents in a friendly and educational background. Julie was interested in journalism from her early age and her father highly encouraged her to secure her career in Journalism field. She attended Emerson College and earned a bachelor degree in 1996.

After her graduation, she began her journalism career working as a reporter at WLVI-TV in Boston. She has also worked for several local channels. On October 1997, she worked as a news anchor for WHSV – TV / Gray Television. She worked there around ten months and went to join WBRE-TV/WYOU-TV in 1999, where she served as a news anchor and reporter. Likewise, she serves as a news anchorwoman for WHSV-TV.

With Kristin Fisher at the shadow of New York City home to Press: Twitter

After struggling for several years, she got the chance to join Fox News Channel in March 2005. Later on, she also worked in the anchor position for Fox Report Weekend. In 2010, she signed to the position of general news correspondent.

“Listen, you don’t need to stoop to the level, obviously. I don’t care who you are. You don’t stoop to the level of that. I mean that’s like me scolding my 4-year-old for using a bad word and then me repeating it. That’s just not how you run a country or you parent a 4-year-old. I mean I have to be honest, you know, if you see this negative commentary on a show, change the channel. Ignore it. I mean that’s what I tell my kids: When somebody’s means to you, don’t fight back. Just walk away.”

President Trump’s actions were seized with accusations of being sexist and misogynistic. Nicolle Wallace, a former information director for President George W. Bush even mentioned about the tweets declaring,

“As someone who once proudly called myself a Republican, the party will be permanently associated with misogyny if leaders don’t stand up and demand a retraction” and further asked Women in Trump’s Administration to speak against their president’s unjust words.

Many other notable personalities called out Donald Trump for his words including CNN’s Don Lemon.

Julie is a happily married woman. She and Andrew J. Sansone has been married for several years. The couple announced their engagement on September 21, 2008, and their wedding date was set on August 29, 2009. Her husband, Andrew is a member of the board of directors of Habitat for Humanity and founding president of both Old Rock Media and Big Apple Channel. 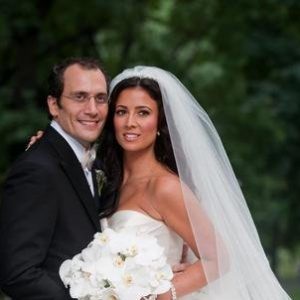 The couple has been blessed with three children named Addison Melissa, Avery Julie, and Andy Harrison. Currently, she is staying happily with her husband and children and resides in New York City.

After I leave my day job I then go to work. This is what taking my kids to dinner looks like. pic.twitter.com/uJZtTKq49t

Julie is living a blissful life with her family and there is no signs of their separation, However, there was a rumor that she and her husband Andrew got separated, but, afterward, the news found to be false.

Banderas is one of the well-known journalists and considered to be well paid. She surely earns her attractive salary from her journalism career and her annual salary is $600 thousand dollar. Her estimated net worth has $12 Million. To know more about her follow her social sites.