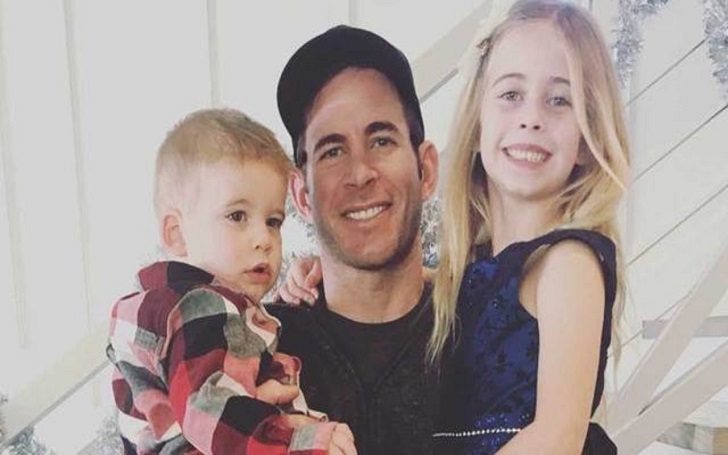 A father’s love is just important to a child’s personality as a mother’s and sometimes more. Base on this information Tarek El Moussa, the star of Flip or Flop celebrated his 36th birthday with his children.

You might be thinking that celebrating a birthday with his own children is a common thing but here’s the fact is different. Although, Christina El Moussa and Tarek are married but already had a divorced.

After a divorce that they still live like a loving couple only for their children and this clarifies that love between parents and their children is always and forever. It doesn’t matter how hard time is parents going through. Tarek and Christina love their children too much and are together for the future of their children.

So, let’s get into the topic to find how did Tarek celebrate his 36th birthday.

Tarek celebrated his birthday with his two children Taylor (6) and Brayden (2) and can you believe that they really enjoyed their backyard party.

‘My kids are just full of joy and happiness and I’m the luckiest father alive!!!!’

[ CAPTION: Tarek celebrating his birthday with his children ][ SOURCE: Instagram ]

The before his birthday, he celebrated Brayden’s second birthday with his friends and family.

Happy Birthday to my BIG BOY!!!! I can’t believe my little homie is 2 years old!!! LOL he attacked the cake!!

Tarek celebrated his birthday with his children but his ex-wife Christina is missing don’t you think so?

There is not any photo of her with him. Where was she? Well, we are also unknown about this matter but do you wanna know the reason for their divorce? Yes.

Then let’s talk about it.

We came to know that their relationship take U-turn in May 2016 when police responded him as the deadly male with a gun. The rumor also began to take a surface that Tarek verbally abuse Christina.

“He drank and was verbally abusive to Christina, so he needed to take care of his issues. Christina said he needed to get his temper under control,”

“He did it to try to win back, to show me that he was changing, but at that point, I was already done with him.”

And after this all matter they finally announced for divorce in December. And Tarek said:

“I feel like if we had better communication, we would have had a better relationship. I think as time went on, you get busier and busier. It was like overnight: businesses, TV, all these things happened overnight, then the cancer and the back surgery. It just kind of started pushing us apart from each other,”

Although the couple separated, they are living together only for their children. And this clarifies that they love their children very much.