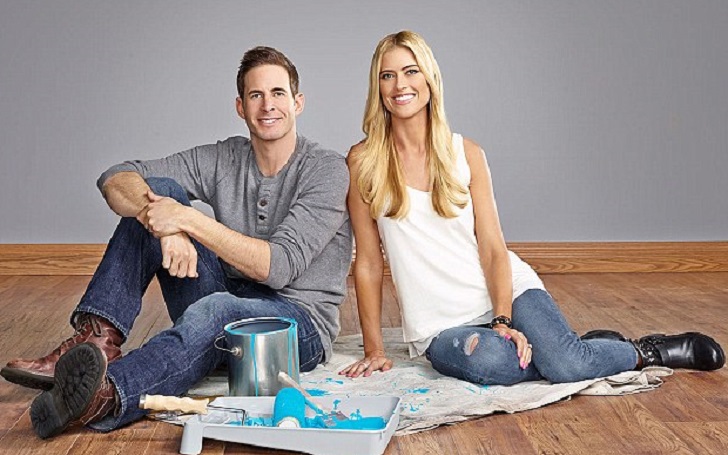 Married life is so easy. It’s just like a walk in the park. But the problem is: that the park is Jurassic Park. A real estate investor and TV personality, Christina El Moussa has become successful at a real estate investment strategy called “house flipping”. Moving toward her personal life she is married to Tarek El Moussa. But there is a rumor that they already had divorced.

So is this rumor true or false? Do you know the fact? No, then let’s get together to find their relationship, children and also about their divorce rumor.

When Christina had just finished her college and had entered the world of real estate business, she met Tarek for the first time.  They dated for short period of time and soon they decided to turn their love life into married life and got married in 2009.

They have two kids named: Taylor ( daughter) and Brayden (son). The couple was seen spending most of the time with their kids.

On August 2016 when her son, Brayden was born and she was very much excited during the birth of her second child. And even her daughter, Taylor was also excited to welcome a new member to the family.

“She really wanted a sibling. So we kept telling her, ‘Mom is really trying to make a baby.'”

“It’s exciting to have a son and a daughter. The second he gets old enough, I’m going to step back from work and focus on raising them.”

So, Tarek and Christina were living a happily married life but there was a problem that they were facing. What might be the problem!!!!! let’s find out.

The couple already had spent many years together but it seems that the reality stars are facing the reality of their own personal drama.

After 7 years of marriage, Tarek has filed for the divorce from his wife Christina. But they are committed to working together for their children’s future and also for their successful show Flip or Flop.

Christina said to Good Morning America in a solo interview:

“Our primary focus is and always will be our kids, We continue to work together and there’s a lot of  false stories and a lot of hype, but, in the end, we’re just normal, nice people who just want to be the best parents.”

#Dancing with the #stars… No #dancing with my #stars!! Nothing like coming #home to these two. #luckiest man #alive❤️❤️❤️@christinaelmoussa

At present, the couple is formally separated but they are just normal people who still want to be the best partner. All they do is for the future of their Kids. We know that there is no greater than mom’s love and no care is greater than dad’s care. So we can say that the couple is together after separation because of their children.

For more information be with us Dodoodad.com.