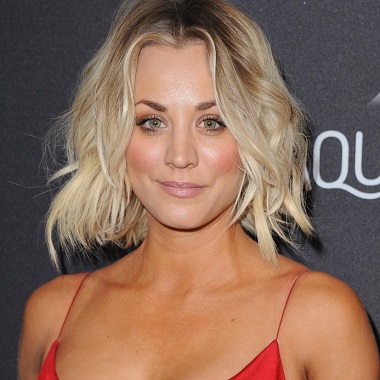 The People’s Choice Awards winning actress, Kaley Cuoco is widely recognized for portraying the role of Penny in the television series, “The Big Bang Theory.” Having active in the entrainment industry since 1992, she has appeared in several films and TV series.

Currently, Kaley is dating Karl Cooke, since 2016. Kaley was previously married to Ryan Sweeting in 2013 but divorced after two years of marital relationship.

Kaley Christine Cuoco was born in Camarillo, California. She is the daughter of Layne Ann, a homemaker, and Gary Carmine Cuoco, a realtor. Her younger sister, Briana, competed on the fifth season of “The Voice.”

As a child, Cuoco was a regionally ranked amateur tennis player, since the age of three. To focus on her acting endeavors, she stopped playing at the age of 16 in 2002. She was home schooled on the set and earned her high school diploma at age 16. She did six Barbie commercials when she was younger.

Cuoco began her acting career in Michael Pressman’s thriller film “Quicksand: No Escape” playing Connie Reinhardt in 1992. Then, in 1994, she appeared in teen drama television series “My So-Called Life” where she played Young Angela Chase. Winnie Holzman created the series and produced by Edward Zwick and Marshall Herskovitz.

After appearing several TV series and films, Cuoco landed a role Maureen McCormick in the biographical drama film “Growing Up Brady” in 2000. In which, she was nominated for YoungStar Award in the category for Best Young Actress in a Mini-Series/Made for TV Film. Matt Dorff wrote the film and directed by Richard A. Colla.

In September 2002, Cuoco started starring as Bridget Hennessy on the ABC sitcom “8 Simple Rules.” In the film, she was the oldest child, despite Cuoco being six years younger than Amy Davidson, who acted as her younger sister.

Kaley Cuoco began starring in the CBS sitcom “The Big Bang Theory,” in September 2007, playing Penny, a Cheesecake Factory employee and aspiring actress who lives across the hall from scientists Leonard Hofstadter and Sheldon Cooper. Chuck Lorre created the series and Bill Prady and directed by Mark Cendrowski.

She also dated an actor, Al Santos around 2007 after which she started a romantic relationship with her co-star of “The Big Bang Theory,” Johnny Galecki. The couple dated secretly, during the time of the show when they were dating on-screen as well. They were together for two years from 2008 to 2010 after which they split up.

In 2011, Kaley Cuoco dated Christopher French, musician and after one year later they separated. She engaged to Josh Resnik, an addiction specialist from 25th October 2011. But the couple never ended up getting married and separated in March 2012.

She likewise dated a singer, Bret Bollinger in 2012, which lasted only until 2013, and she dated Henry Cavill, an actor.

Ryan Sweeting and Kaley Cuoco started dating around 2013. After two months of dating, the couple got engaged on 20th September 2013. She has a fake marriage with him on the Ellen Degeneres Show on November the same year. They officially got married on 31st December 2013, as they got a divorce on 28th September 2015.

Then, Kaley Cuoco briefly dated an actor, Paul Blackthorne in 2015. Currently, she is dating Karl Cooke, since 2016.

In her spare time, she loves listening to Josh Groban and Kelly Clarkson. She enjoys horseback riding, kickboxing, bowling and playing the drums. Horseback riding is her passion. She broke her leg after falling off her horse on 13th September 2010.

Kaley loves the fashion world and love clothes. She is a huge fan of Britney Spears and Taylor Swift. She was ranked #78 in FHM magazine’s “100 Sexiest Women in the World 2005” special supplement and also ranked #13 on Maxim magazine’s Hot 100 Women of 2011 list.

Kaley Cuoco has maintained her career from her childhood and she earning the salary of $1,000,000 per episode. Allocating information from several sources as of 2018 it is found out that her current estimated net worth is around $45 million.

The 5′ 6″ star has a seductive body measurement of -35-24-36 inches. She holds an American nationality and belongs to white ethnicity. Cuoco has a huge fan following on social networking sites like Twitter and Instagram.