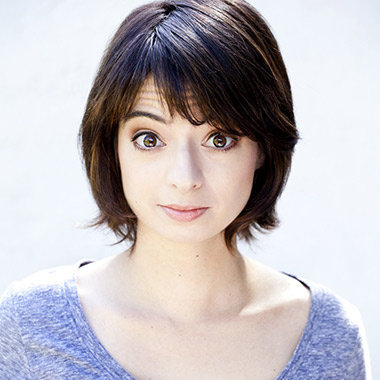 Kate Micucci is a famous name when it comes to female comedian of United States. She has gained name and fame as a actor, songwriter, singer and artist.

Born on March 31, 1980, Kate Micucci has been working continuously in the industry since 2001. She made her television debut on the role of Stephanie Gooch in Srubs and she has been doing music as a one half of comedy duo Garfunkel and Oates. She is also well known for her role as Shelly in Raising Hope and appeared as Raj’s girlfriend, Lucy in The Big Bang Theory. After her appearance in The Big Bang Theory, she grabbed more public attention. She has also contributed her voice for the character Velma Dinkley in Be Cool, Scooby-Doo! and for Sadie in Steven Universe.

Micucci was born in Jersey City, New Jersey and she is of the Italian ancestry. She grew up in Nazareth, Pennsylvania. In Pennsylvania she realized her passion of music when her mother started to teach her classical piano. Having started to play piano form her early days she has developed strong sense of notes and beats. With the support of her mother she has been able to climb success of ladder smoothly. She completed her high school education from Nazareth Area High school along with rock star Jordan white in 1998. She went to Keystone College in La Plume, Pennsylvania from where she received an A.A in fine arts. She also has earned Bachelors degree in Studio Art from Loyola Marymount University, Los Angeles in 2003. Upon graudation she started to appear on numerous television commercials, played role of Toni the barista on NBC’s Four Kings, appeared on guest roles in How I Met Your Mother, Campus Ladies and Malcolm in the Middle. She also appeared in the recurring roles on Scrubs and Raising Hope. Most recently, she appeared on the stage at the Steve Allen Theater on Hollywood Boulevard where she performed “Playin’ with Micucci”. Similarly, she has been frequently performing in “An Evening with Garfunkel and Oates” at the Upright Citizens Brigade Theater in L.A. In 2010, she made her appearance on the role of slightly sedated waitress in When in Rome and TV show Weed. In January 2012, she started to appear on the recurring role in The Big Bang Theory.

In an interview, Micucci said that she had been dating one guy but it didn’t exist for long term. Besides that she has kept most of her personal life hidden from media. Being a versatile woman, she has gained name and money at the same time. She has net worth of $500 thousand. Having short height of 5’2’’ she named herself as Oath in her Duo. To get latest update on this talented woman, she can be followed in facebook, twitter and instagram.