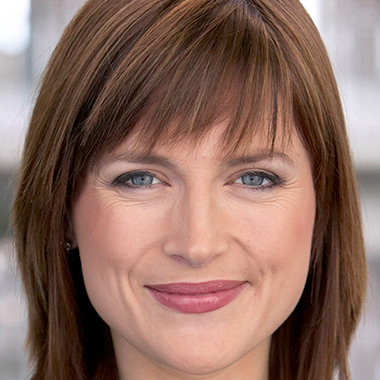 While coming to the BBC broadcasting services, there are several names without which BBC is quite incomplete, likewise, there has been involvement of many great pioneers who has literally boost the power of the network while some are still there holding the great reputation and continuing the self-pride of the service provider. In such list, Katie Derham (Catherine Beatrice Margaret “Katie” Derham) is one of the good names who has set her name in such height that it’s quite impossible to reach there for any ordinary people however she has been taken as the perfect example and motivational factor for many newcomers.

Born on the June 18th of 1970, Katie Derham has represented herself as the English Newscaster, anchor and television and radio star. Accounting her early childhood history, she was born in Canterbury to the father John Derham and mother Margaret Derham. Coming from an ordinary family, her father was a former Chemist serving for Pfizer while her mother was a teacher.

Derham was raised in Kent until the family decided to move to Cheshire, Wilmslow where she attended her primary education in Sandbach and Cheadle Hulme School. During her school time, she took A-Levels in different subjects like French, History, and Economics. Later she graduated with BA (Hons) from Magdalene College Cambridge taking the major subject as Economics.

Right after the graduation, Derham began her career from BBC as a researcher on Radio 4’s Money Box. In the same year, she was responsible for handling the show Radio 5 Live’s Money check for which she received the prestigious award Bradford & Bingley Best Personal Finance Broadcaster award for her contribution to the network. The magnificent time came in her life when she moved to BBC network in the year 1996 as a correspondent in consumer affairs.  She joined ITN in the year 1998 and became the youngest newscaster on British National television.

Likewise, Katie Derham also became the main female character to present the ITV Lunchtime News and ITV Evening News followed by ITV News at Ten. Likewise, she has been associated with ITV London program. She spent 12 years of her precious time in the network and her last show was aired on 25 June 2010. After the ITN she again rejoins the BBC network and was involved in BBC 2, BBC 4 and BBC Radio 3. She is the best presenter of the Afternoon on 3, Breakfast program, Traveller’s tree series and Saturday Live. Likewise, she has appeared in Thirteenth Series, Strictly Come Dancing and other various program aired from the network.

Coming to her personal life section, Derham is blessed with a beautiful physical structure. Similarly, she has the perfect balance between personal life and professional life. Even though she is beautiful, she has never been in a number of relationships and boyfriends. She is happily married to women. She tied her wedding knot with restaurant pioneer John Vincent in the year 1999 in Cheshire. The couple shares two daughters with each other. Similarly, the couple bonding is pretty strong and as a result, the couple has not faced any separation issues along with divorce cases.