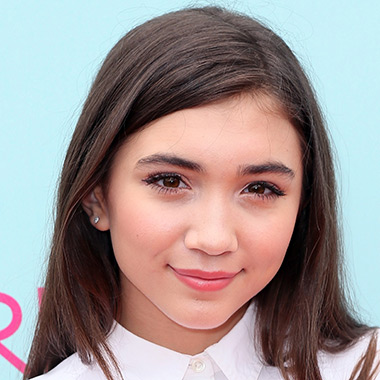 In the long list of young American actresses, Rowan Blanchard is one of the teenage actresses whose charming face and acting skills has won the heart of millions of people around the globe. Having fair skin and a beautiful smile, she is currently regarded as the hot item of the Hollywood industry. Having played in a number of movies in such a small age, there’s no wonder that she will have a marvelous and luxurious life ahead. Coming to the highlight from the role as Riley Matthews from Disney Channel hit series Girls Meets World, she falls under the huge list of Disney Channel hit a celebrity. In her little age, she has already achieved significant height and there’s still a lot to come.

Rowan Blanchard, who was born in Los Angeles, California is the daughter of the yoga instructors, Elizabeth and Mark Blanchard. Describing her ancestor history, her paternal grandfather migrates from the Middle East while her paternal grandmother’s ancestors are from England, Denmark, and Sweden. So, if you ever wondered about Rowan’s beauty then you might find the answers right here. Getting the name from the movie The Witching Hour, Rowan grew up with their parents along with other two siblings Carmen and Shane.

Accounting little Rowan acting history, she came into light or came into the acting industry from the age of five. She was first seen in “The Back-Up Plan” as Mona’s daughter and at the same time, she was in the full cast in Dance-A-Lot Robot as Caitlin which is one of the Disney Junior Original Series. She got her influential role in the year 2011 from the movie Spy Kids: All the Time in the World. After that, she has appeared in a number of films including Little in Common in 2011, A World Away in 2015 and Dance-A-Lot Robot, Girl Meets World, Best Friends Whenever, and Invisible Sister are some of her television critics.

Among all the list of the act, she’s involved, Girl Meets World is one of the highly acclaimed series of Rowan Blanchard. With her short and continuous endeavors in the acting business, she has been to a number of the award nominations, however, she has not won any awards till now but hopefully, she will in future days. Likewise, she falls in the list of a famous and rich teen as she is getting a handsome salary for her role in the Disney series.

Coming to her personal life section, most of the information has been well hidden. Since Blanchard is still in her teen, her schooling and college history is yet to come. Likewise, there are no rumors about her relationship and even we strongly believe, it’s not the right time for her to involve in a relationship and make her boyfriend at this age. Similarly, she is still growing up, so it’s hard to analyze her actual height, however, she is being a fine girl these days and there’s no doubt she will be spectacular in the coming days.