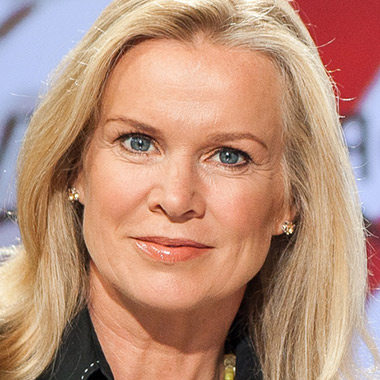 Katty Kay is an English journalist. She works as the lead anchor of BBC world News America. She previously worked for the BBC News Washington correspondent from 2002. She is also a Board member at the International Women’s Media Foundation.

Kay was born on November 14, 1964. Her birth name is Katherine “Katty” Kay. She was raised in various Middle East countries where her father was posted. She attended the University of Oxford at studied Modern Languages there. She can fluently speak and writes French and Italian.

She worked for the Bank of England after her graduation. She decided that Economics is not for her so she left to work for an aid agency in Zimbabwe. She was persuaded to become a journalist by her friend Matt Frei as he came with a tape recorder. In 1990 she joined the BBC as Zimbabwe correspondent. She then worked for BBC World Service radio after returning to London. In 1992, Kay was posted to Tokyo for BBC News television and then later in 1996 was posted in Washington, D.C. she then joined The Times news bureau. In 2002 as a freelancer she returned to the BBC which is based in the United States.

From June 2004, with Mike Embley, she co-presented the BBC World news bulletins which were shown on 230 public broadcast television stations on BBC America and the US. She then became the correspondent to presenter Matt Frei of BBC World’s one-hour Washington-based news broadcast, BBC World News America from 1 October 2007. It airs on the BBC News Channel, BBC America, and BBC World. She also had frequent appearances on Meet the Press on NBC and on The Chris Matthew Show as a guest panelist. In the past, she also appeared on CNN’s Larry King Live. She also works as the substitutes on The Diane Rehm Show on NPR for Diane Rehm.

Katty Kay and ABC News’ Good Morning America senior national correspondent,  Claire Shipman wrote a book Womenomics. The book was published by Harper Collins on June 2, 2009. HarperBusiness published “The Confidence Code: The Science and Art of Self-Assurance—What Women Should Know” on April 15, 2014. The book was written by Claire Shipman and Kay.

Claire Shipman is a happily married woman. She got married to Tom Carver. Tom is an ex-BBC reporter and current Control Risks Group senior vice-president. The couple together is blessed with four children. She does not follow any religion as she is non-religious. She considers herself an agnostic. She is very beautiful and is active in using her social accounts. Kay mainly uses Twitter and tries to keep in touch with her fans and followers through her social accounts. Her biography can be found in Wikipedia and other wiki sites. Her pictures can also be found on the Internet easily.